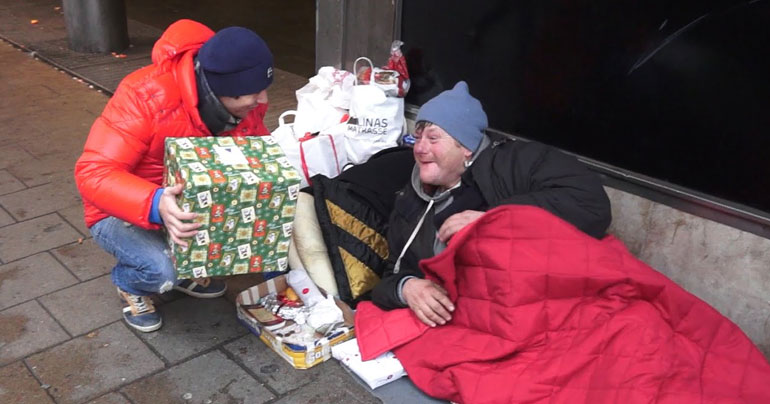 Homeless people across Northern Ireland are uncharacteristically looking forward to Christmas this year, amid a ground-swell of concern for their welfare amongst a normally uncaring population.

The optimistic mood has been fuelled by debates on social media over the arrival of refugees from Syria, whose plight has led to numerous calls to “help our homeless first”.

“wAT aBOUT r oWN hOMELESS,” demanded Limavady housewife Cheryl Bile, who had no doubt lost her typing skills due to exhaustion after a 12 hour shift at her local shelter. “tHEY sHUD gET pRIOTITY oVRR tHESUNS.”

Gary Rant from Craigavon agreed. “I here there giving them cars, X boxes and boats,” he commented on UTV’s Facebook. “Y do they need boats? R homeless need boats too.” We tried to contact Mr Rant for further comment this morning but were told that he was out distributing boats on the streets of his hometown, and couldn’t be distracted from this important work.

The first plane carrying refugees flew into Northern Ireland last night, re-igniting measured intellectual discussion amongst angry locals, many of whom had to cut short their fundraising activities to reiterate their humanitarian beliefs that anyone else who needed help could ‘go f**k themselves’.

The development is also a huge worry for bin men across the Province, who now fear the mountain of cardboard packaging leftover from Christmas will now actually need disposed of, as people sleeping rough on the streets are given beds by big-hearted bigots.

The Salvation Army posted on Facebook today saying “Great to see so much concern for the homeless people in NI. We’re looking forward to the cheques arriving!”

However it wasn’t long before someone took offence. “Get de f**k!  First Syrians… and now Czechs! Close the borders FFS!”