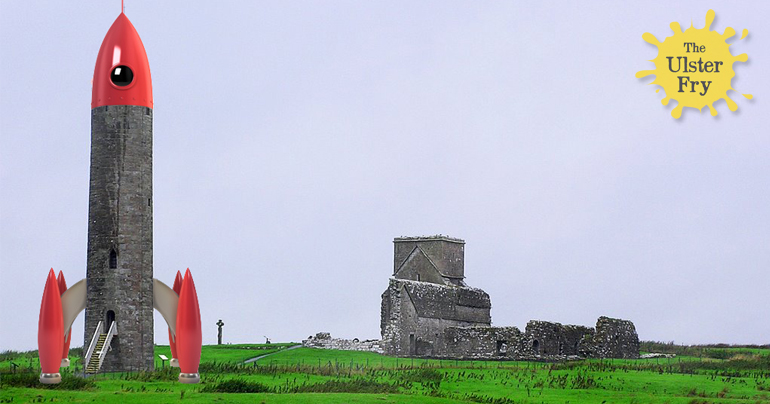 On the day that UK astronaut Major Tim Peake travelled to the International Space Station, the Ulster Fry can reveal that Fermanagh and Omagh District Council has launched its own audacious bid to become the first Northern Irish local government area to put a man in space.

The plan has been hatched amid growing concerns about flooding in the district, with local bigwigs worried that upwards of 95% of County Fermanagh could be underwater by 2019.

“We have to prepare for the worst,” says council chairwoman Liz Bellaw. “We thought about building more flood defences, but that’d just be throwing good money after bad. The next logical step is to explore the possibility of colonising another planet, most likely Saturn as it already has a branch of Dunnes.”

The Ulster Fry understands that scientists at the Enniskillen Space Agency have been working on the project “for a lock of weeks,” and now have a fully functional rocket at their facility on Devenish Island. “She runs on red diesel bai,” we were told by lead engineer Irvine Stown, “an’ can do nought til sixty in 27 seconds, even with the trailer on the back of her.”

Other council areas are also said to be exploring the possibility of space travel. Mid and East Antrim Councillors have already invested heavily on research into a permanent base on Mars, in the belief that “it’s bound to be better than living in Larne.” Meanwhile Belfast Councillors are arguing about whether or not they’ll need Irish language street signs for a similar structure on Uranus.

However back in Fermanagh the process is much more advanced, with 56 year old Derrygonnelly farmer Gerry Donnelly the man tasked with carrying the council flag into orbit.

“Aye it’s a quare auld dander for a man,” he told us, “and a wile big leap Fermanaghkind.”