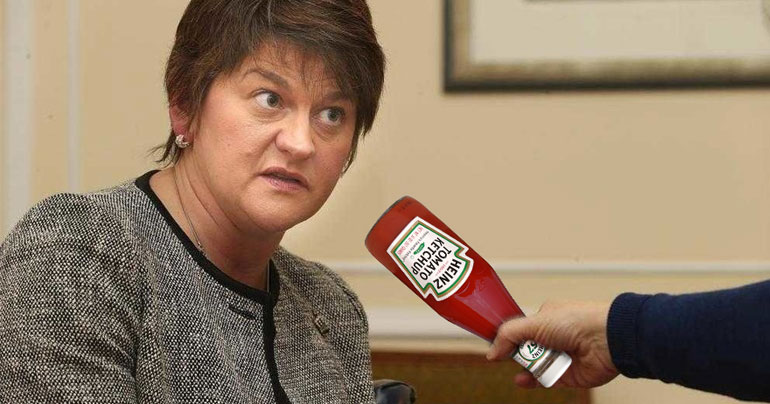 With the country already in turmoil following the collapse of the NI Executive, Ulster’s political crisis deepened even further today following revelations of widespread disagreement at Stormont about to where to keep the tomato ketchup.

“Constantly blaming each other for wasting public money or once being affiliated with terrorism might dominate their press coverage” explained top civil servant, Cyril Cervantes. “but I can assure you that behind closed doors the real bone of contention between our political leaders is where they left the red sauce!”

“The Shinners like to keep it in a bunker under a farm house in south Armagh”  he revealed. “Whereas the DUP prefer to stick it into in the freezer… to stop it getting too warm n’ that.”

“Alliance like to let on they are OK with it being either cold or hot” he continued. “But then they pour it into a nice crystal decanter and serve it with ripe avocados, tender stem broccoli, fresh thyme and rosemary!”

“The SDLP and the UUP are the worst” he went on. “They keep letting on that they both like to stick their ketchup in the same place. But there’s one fundamental flaw in their game-plan!”

“The TUV are actually totally against using any kinda of sauce!” added Cervantes finally.  “They believe it’s a mortal sin. Ye should see the dirty looks Big Jim fires out in the canteen when anyone brings anything remotely saucey near him.”