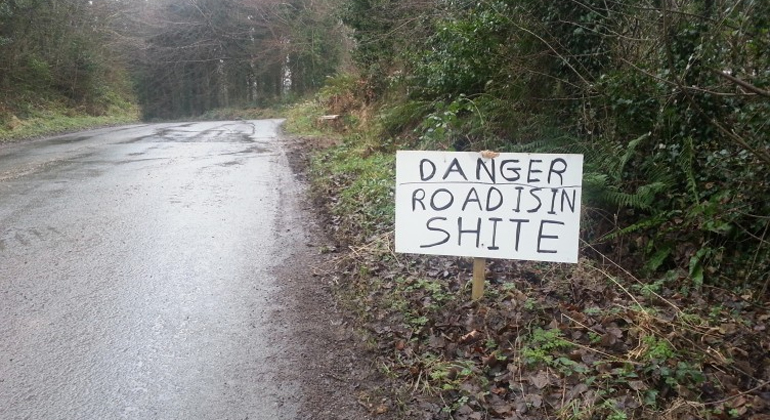 The public body responsible for Northern Ireland’s roads has admitted that the entire network is  “shite” and “of a standard not seen outside sub-Saharan Africa.”

“Aye, to use a fancy politician’s phrase our roads aren’t ‘fit for purpose’,” confessed Transport NI spokesman Daley Tailback, “or ‘completely f**ked’, to use a layman’s term.”

The revelation follows another day of chaos on the country’s roads, with an accident outside Toome causing particular misery for evening commuters yesterday. As a result of that fiasco 14 motorists are still missing round Lough Neagh, having been diverted onto single lane roads by police. “We think they’ve gone feral,” said Chief Superintendent Jack Hallion of the PSNI’s Traffic Branch. “They’re living in woodland outside Ballyronan and surviving on roadkill, which there’s plenty of, to be fair.”

The road between Derry and Belfast is notoriously shite, turning from motorway to country road abruptly in the back-arse of nowhere. “This is an historical anomaly,” explains Mr Tailback, “our politicians couldn’t agree whether they wanted to build a motorway to Derry or Londonderry, so in the end they just built it as far as Randalstown.”

“It’s great for business though,” he went on. “When Invest NI get foreign investors over they can drive them up to the North West and the visitors get to see how quaint our transport links are. Americans love all that thatched cottages/country lanes stuff.”

Elsewhere the crowded road network is at breaking point, a situation worsened by inadequate and overpriced public transport, never-ending roadworks and the fact that only 10% of the motorists actually have a clue how to drive their vehicles.

“Aye it would help if drivers didn’t forget how to turn on headlights, learned how to indicate and didn’t spend most of their time weaving in and out of lanes in the vain hope of gaining 10 feet in a traffic jam,” says Tailback.