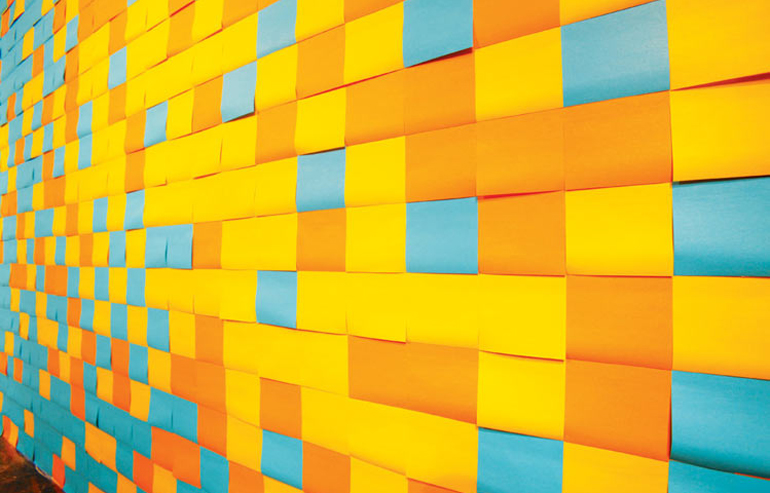 A 45 year old finance clerk from Ballymena has been jailed for two months after being found guilty of stealing thousands of Post-it notes to decorate his home.

Passing sentence, the judge said Francis Toner was a “hardened criminal, who systematically defrauded his employers by stealing tens of pounds worth of conveniently adhesive squares of paper, to line both his own pockets and the walls of his house.”

The PSNI’s Detective Superintendent Gary Lever-Arch explains it is a growing problem.

“It generally starts small, a few paper clips, maybe a box of thumb tacks,” he told us. “But before you know it people are trying to sneak the photocopier home. A woman in Dungiven even stole her boss, kept him in the shed and made him cut the grass in the summer.”

Many people we spoke to confirmed that such crimes are common.

“I bought my wee lad the same printer as the work one so I can nick the ink for it,” revealed bank clerk Polly Pocket. “Saves a fortune but my back is broke carrying reams of paper home in my handbag. I’ve been out on the sick for a month now so I’ll probably have to put a claim in for work related injuries.”

“I steal a box of highlighters every week,” confessed call centre operative Rick Biro. “My daughter sells them in school. She’s become a right wee entrepreneur and it saves me giving her money for fags.”

However for one civil servant a simple office scam almost ended in disaster. “Aye, I pushed it too far,” admitted Britt Stick. “Started out with pens and pencils, moved on to bog roll, but then ended up spending six months in hospital when I switched to a staple diet.”