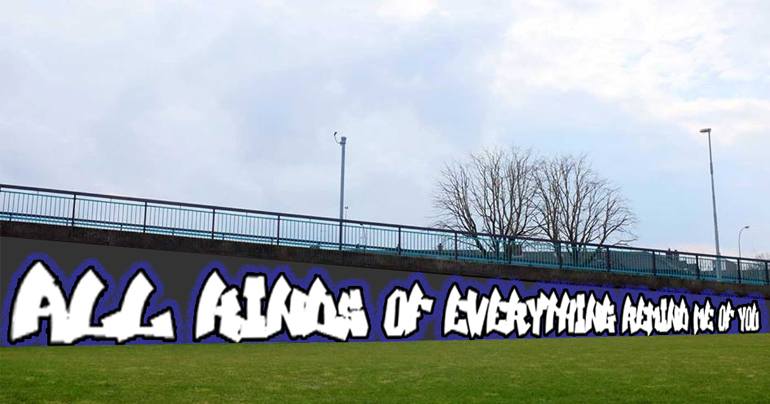 There were celebrations today after an iconic mural depicting the lyrics of Dana’s 1970 Eurovision winning song “All Kinds of Everything” was repainted on the wall of an East Belfast flyover.

The mural was controversially over-painted last year, leading to an outcry among people of a certain age, for whom the lyrics held a deep, perhaps even mystical meaning.

“I first remember hearing the song in early 1970,” said old person Sean Clamp, “and the words just reached out to me, especially the opening lines about snowdrops and daffodils, butterflies and bees, and how they reminded Dana about stuff. Even now, nearly 50 years later, the song brings a tear to my eye, and reminds me to do things, like wash the car and go to the toilet.”

His friend and co-accused Winston Spanner was in full agreement, although he told us that he preferred the lines ‘Budding trees and Autumn leaves, a snowflake or two’, as they helped him remember when to collect his pension. “It’s great to see the murial back,” said Winston, “it’s important that we remember the immense contribution that Dana made to popular culture. Without her, there’d have been no Nolan Sisters, probably no Daniel O’Donnell.”

Young people, meanwhile, have expressed bewilderment at the importance of the painting to their ageing neighbours. “It’s just an auld song,” said 22 year old bricklayer Gary Hatchet, “I could understand it if it was the lyrics of Ed Sheerin or that moany boy who goes on about Budapest, but I suppose it’ll keep the old folk happy.”

DSD Minister Mervyn Storey, whose department paid for the reinstatement of the painting, said he was delighted with the results, so much so that he intended have the entire lyrics to Hugo Duncan’s ‘Horse it intae ye Cynthia’ painted onto the front walls of Stormont. “There’s bound to be some votes in that,” he explained.