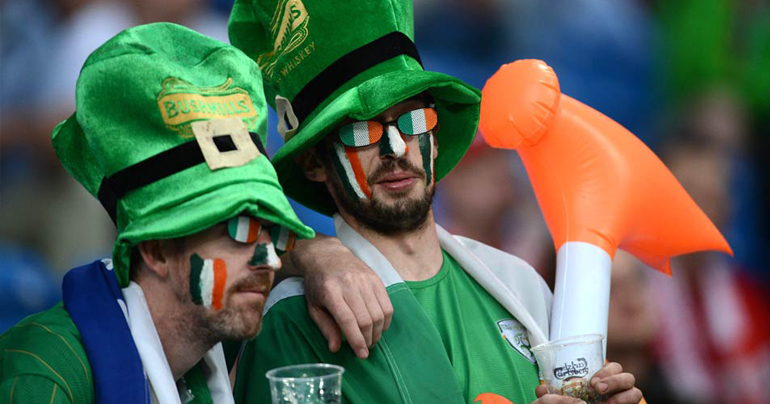 Ireland’s national day of getting pissed and singing songs they only half know the words to was thrown into crisis this morning, after historians pointed out that St Patrick was in fact a Brit.

“Ah f**k, I think they actually mentioned this in school years ago” said local Republican Fiachra O’Heara. “I remember a far fetched yarn about a British fella with a beard getting captured by pirates and taken on adventures across the sea, but I always thought it was that film with Orlando Bloom and Johnny Depp. Canny believe our Patron Saint was a Brit!”

“So, which one of them was nailing Keira Knightley?” he inquired, confused, but still hopeful.

Later we asked the Orange Order how they felt about a famous British immigrant coming to Ireland, disowning his heritage, taking Irish citizenship and leading the Irish people onto great things under the emblem of the shamrock. As we expected, the response was not pleasant. “He’s a traitor to his own kind!” said Sammy Carson, Worshipful Master of Lisburn’s Rising Sons of Jeffrey Donaldson.

“Absolutely no one in the Orange Order likes Jack Charlton!” he responded. “In fact he’s in the TOP THREE of our big fat traitors we hate list, alongside Saint Patrick and Lundy” he continued, pointing to an colourful embroidered banner hanging above the door reading ‘Big Fat Traitors We Hate’.

The Americans couldn’t hide their disappointment either. “We like the British, don’t get us wrong.” said Barack Obama in his White House address this morning. “But we just spent $4.7m dying the Hudson River green and $1.2m on a massive floppy hat and sexy green hot-pants for the Statue of Liberty, so to say this news ‘stings’ is something of an understatement.”

“Especially after I signed the customs clearance to let Gerry Adams into the country with a 25ft f**kng trampoline.”

Surprisingly the DUP have defended St Patrick vehemently. Speaking on the steps of Stormont today, Peter Robinson said that St Patrick was “a fine upstanding Ulster Christian who lived by the Good Book” and that he would “forever be remembered for ridding Ireland of Gay Snakes”