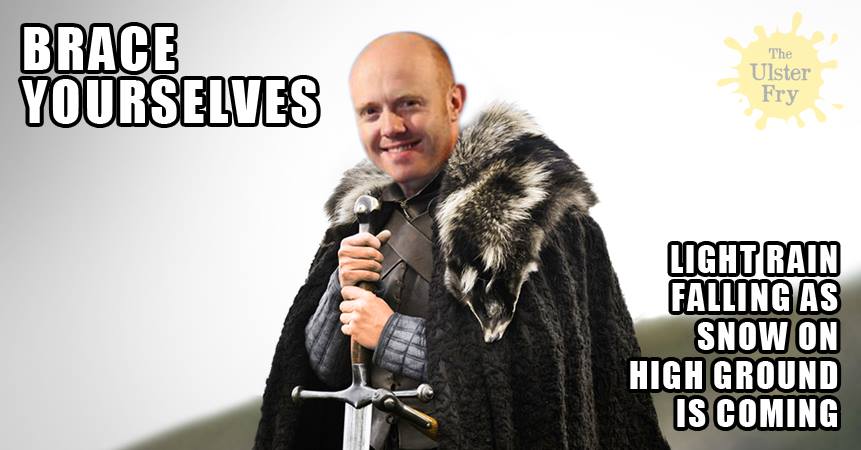 There was widespread panic across Northern Ireland last night, as Mother Nature unleashed what journalists have described as a “Massive Snow Explosion” . The extent of the weather chaos was matched only by the wildness of the celebrations in local media circles, as they were finally able to set aside stories about hospitals and replace them with reports about the temperatures in Castlederg.

On BBC NI Angie Phillips revealed that Katesbridge was officially part of the Antarctic after almost 5 inches of snow fell on the County Down village. Not to be outdone UTV Weather Terrorist Frank Mitchell converted his measurements into millimetres, allowing him to startle non-metric pensioners by announcing that nearly 100mm had fallen on the Glenshane, before forcing them to guess which town he’d been secretly photographing earlier in the week.

The websites of local newspapers were quick to jump on the “Snowmaggedon” bandwagon. In Tyrone the Herald announced that all schools in the county would be closing “indefinitely” and advised parents to eat their children if they couldn’t reach the Spar for a loaf. Likewise the Coleraine Chronicle whipped its readership into a frenzy by describing the roads chaos they would face in the morning, if they lived somewhere that huge amounts of snow would actually fall.

Elsewhere other regional press sites attempted to lighten the mood. In Limavady the Sentinel published a story on a local artist who had replaced the statue of the Celtic Sea God stolen from Binevenagh Mountain with his own version entitled Snowmanannán Mac Lir. Meanwhile the Portadown Times dispatched its reporter to Markethill, where controversial campaigner Willie Frazer had erected a snow sculpture of Pope Francis, beneath a large sign declaring “Snow Pope Here”.

Social media later went into meltdown, after local users crashed the Facebook servers by posting thousands of pictures of the snow outside their homes, in a charitable attempt at saving friends from looking out the window. However everyone’s bubble was eventually burst after “that Canadian friend” we all have posted a status about how “this wasn’t really snow at all” before going on to recount, again, the tale of how he was once attacked by a bear whilst travelling to work on the back of an elk during a blizzard in 2003.