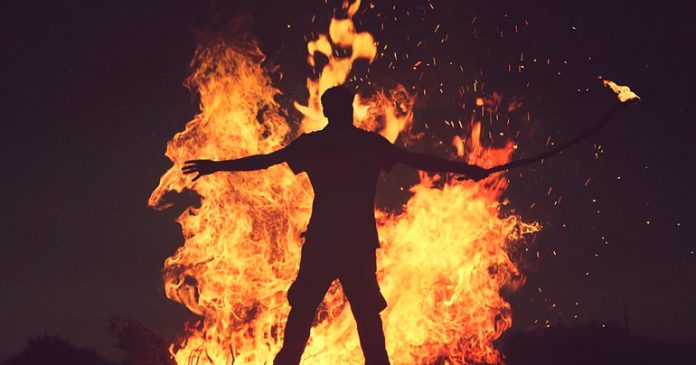 Being an arsehole with a sideline in bonfire building has replaced Tattooist and Fake Tanner as the fast growing employment sector in the greater Belfast area, a survey of the job market here has revealed.

“Being an arsehole is a year round activity, but increasingly we’re seeing full-time arseholes supplementing their lack of income with summer jobs setting fire to shite in the middle of the road,” says Cassie O’Calculator from the research team at Larne School of Economics.

“It’s not a particularly profitable activity, for anyone involved, but for arseholes it represents a valuable opportunity to take a break from stealing cars and ingesting huge quantities of Ketamine behind the bins.”

New Lodge bonfire builder Sean Vesta says that setting fire to things in the middle of his estate is an important part of his cultural DNA.

“It’s all about expressing myself as an artist and a Republican,” he explained. “The flames symbolise the burning passion of our community, and the swirling patterns left in the melted tarmac afterwards represent the tormented soul of Ireland under the jackboot of British oppression.”

The emergency services have welcomed the growth in the bonfire sector.

“It’s just what we need each summer,” said a spokesman for the fire service. “If it wasn’t for these bonfires we’d just be hanging around the station occasionally saving lives. This is a great opportunity to engage with local young people, and for them to throw bricks at us.”

None of the bonfire builders’ parents were available for comment.