Peace Process under threat as dissidents switch to Samsung Note 7 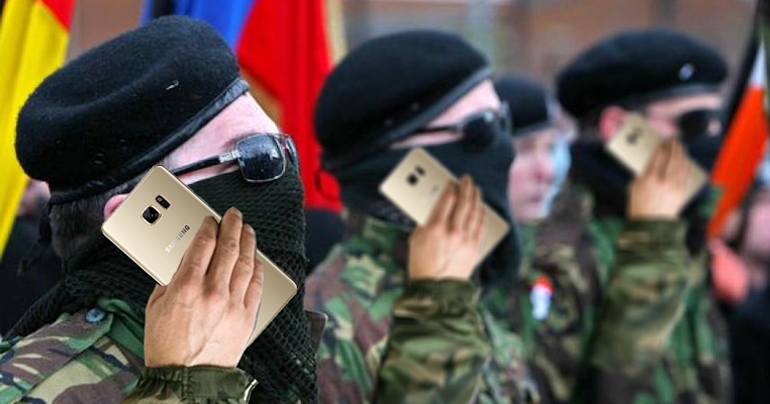 There are growing concerns for peace and prosperity in Northern Ireland after reports emerged that dissident factions of both Republican and Loyalist terror groups have begun stockpiling the deadly Samsung Note 7.

The PSNI have started patrolling shopping centres across the Province following the news, in an attempt to ward off the threat of terrorists arming themselves at Carphone Warehouse.

“These deadly phones are a game changer” admitted PSNI bomb disposal expert, Sam Tex. “Someone phoned a warning through last night saying they were putting a Note 7 outside a local police station. However the stupid hoor actually called us using the Note 7… so thankfully his plan blew up in his face… literally!”

“We’re taking reports of the amount of damage our exploding handsets can cause very seriously” said Linus Crackley from Samsung earlier. “We’re always striving to improve our products and it’s clear we need to up our game!”

“So we’re pleased to announce that the new ‘Samsung Barrack-Buster 8’ will be ready in time for Christmas! It’ll have 8 times the explosive capability… and comes with a free 3 month subscription to Spotify!”

Not to be outdone rivals Apple have fast-tracked work on the iPhone7-C4, which experts say will introduce a revolutionary new ‘Hand-Grenade Mode’.  However fanboys are unhappy with rumours that the tech giant plan to do away with the physical grenade pin in favour of a wireless bluetooth trigger.

“Pretentious f**king hipster grenades” remarked one man we spoke to.  “lovely design though!” he added.

“It’s very worrying” admitted a senior Government spokesman later. “People haven’t exploded on the phone like this since we hired Concentrix!”