PSNI hire Batman to “sort this clown sh*te out” 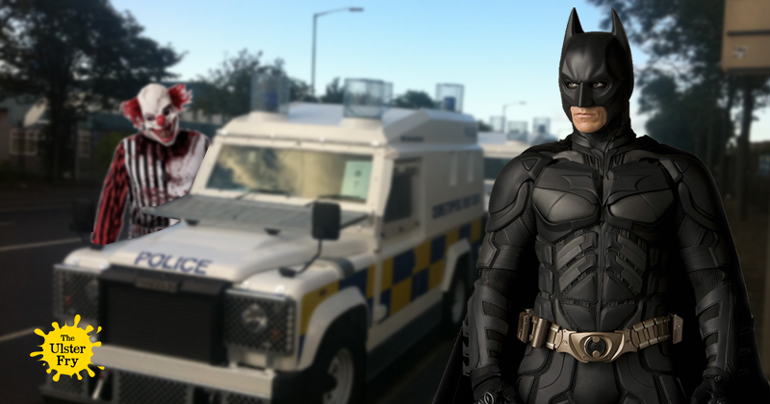 The PSNI has made a swift move to clamp down on so-called “Killer Clowns” here, by hiring well-known superhero Batman to deal with the dicks behind it.

The craze, which began in America of course, involves arseholes dressing up as scary clowns then lurking in the shadows in an attempt to terrify passers-by.

“We didn’t feel fully equipped to deal with this phenomenon,” says Superintendant James Gordon. “We sought outside help and Mr. Batman was the obvious choice, given his long history of dealing with scary looking clown types like the Joker. Luckily for us he was at a loose end and agreed to come over.”

Batman had to undergo rigorous training to adapt to the PSNI’s working practices.

“I spent three weeks at your training college,” he revealed, “learning how to sit around on my hole drinking coffee while engaging in Facebook banter with other stations, as well as mastering the art of eating a Chinese takeaway in the back of a Landrover. It went well, and I managed to put on three stone to reach the required weight for serving PSNI officers.”

The Dark Knight has now been unleashed onto the streets of Belfast to combat the craze, and intends to sort the problem in his own, unique way.

“I’ll just knock their ballix in,” he says. “Folk here have had 40 years of masked clowns terrorising them, they don’t need any more of this shit.”

Superintendant Gordon has confirmed that if Batman is a success the PSNI would consider hiring other fictional superheroes to deal with crime here.

“We’re in talks with Spiderman,” he told us. “Apparently he has this thing called ‘Spidey Sense’ which might come in handy for dealing with wee hoods nicking cars.”