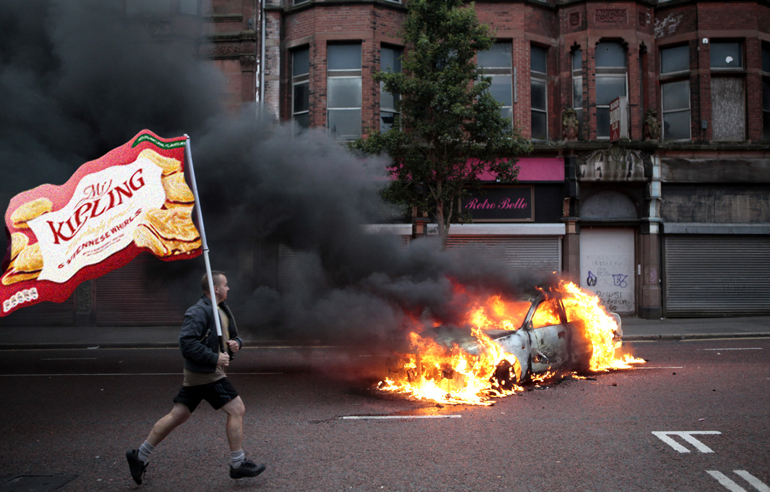 There is growing concern in security circles that Northern Ireland stands on the brink of civil war, as heated internet debates about Gay Cakes began to spill over into violent street confrontation.

“Huge rows began on Twitter and Facebook within minutes of the court judgement being released,” says security expert David Battenberg. “We rapidly saw the interweb split in two, with Gay Cakists on one side and fervent Christian Bakers on the other. This soon degenerated into name calling, and we are now seeing the Christian bakers turn against cakes in general, whilst their opponents have reacted by rejecting anything biscuit related.”

The first sign of street protests came in the Co Antrim Bible Belt, where bakery supporters smashed the windows of cake shops and burned effigies of Mr Kipling on a huge bonfire made entirely of Victoria Sponge. Soon after a Gay Cakist militia stormed a cafe in Belfast City Centre chanting “Tray bakes are not cakes”, and viciously assaulted anyone they found enjoying a caramel square.

“We now believe that Northern Ireland is dividing into two very distinct camps,” says Chief Constable Derek Dundee, “we have reports of Biscuit refugees fleeing Cakist held areas and vice versa.  As usual, fans of Jaffa Cakes are being shunned by both sides.”

In a last ditch attempt to negotiate peace, the UN has organised round table talks involving Mary Berry, Bert and Ernie, God, Stephen Fry, a packet of McVities Digestives and the ghost of Ian Paisley, in the hope that some kind of deal can be reached. Early hopes for a breakthrough are waning however, after a compromise proposal put forward by God and Stephen Fry was overruled by Bert and Dr Paisley.