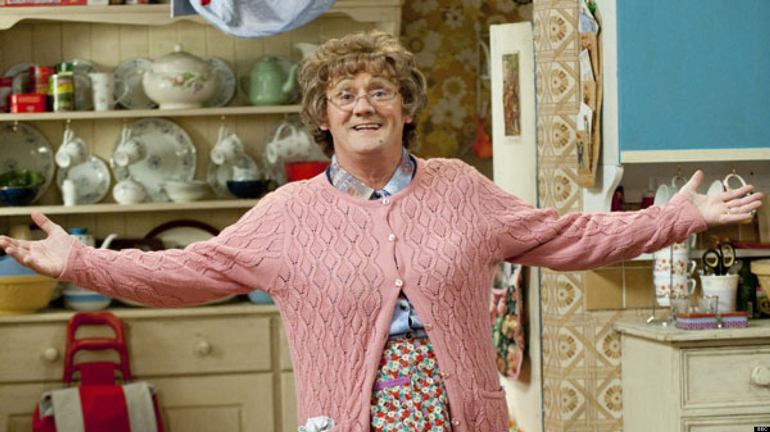 The expected “yes vote” in the Republic’s same sex marriage referendum now hangs in the balance after a series of celebrity endorsements spectacularly backfired. In particular, recent opinion polls indicate that a pro-Yes advertisement featuring TV ‘comedy’ character Mrs Brown has in fact turned voters towards the No camp.

“I was all for same sex marriage til Mrs Brown got involved,” said 28 year old Athlone man Sean Beamish, “I f**king hate Mrs Brown. I hate her face, I hate her voice, I hate her shit TV programme and I hate everything she stands for. I’d rather put my head in a chip pan than have anything to do with her, so I think in going to vote No… even though I’m gay myself.”

“I’m with that fella in the last paragraph,” said 24 year old retired civil servant Orla Stout, “Mrs Brown should be strangled with her own tights, but even worse, Bono’s now got involved. The man’s a tax dodging arsewipe.”

However despite these setbacks, the campaign team remained optimistic up until the public backing of country star Daniel O’Donnell burst their bubble. “That was a real blow to the cause” admitted ‘Yes’ Director of Communications Paula Guinness, “Not only are people telling us they are going to vote ‘No’ now because of O’Donnell’s meddling, but many same-sex couples have since broken up and told us they are going to give being straight ‘another whack'”

Sources close to the No camp say that they are ‘quietly confident’ ahead of Thursday’s vote, feeling that the combined negative impact of the Bono/Brown/O’Donnell endorsements will have advanced their cause enough. “Aye we’re catching up all the time,” claimed No campaigner Niall Porter, “But just in case we’ve lined up a few big name celebs of our own.”

“We’ve got Jim Wells and Ian Paisley Jr coming down from the North, and yer man from Del Monte is flying in from Brazil.” he revealed.  “We asked him if he’d come over and say No and surprisingly he said Yes”