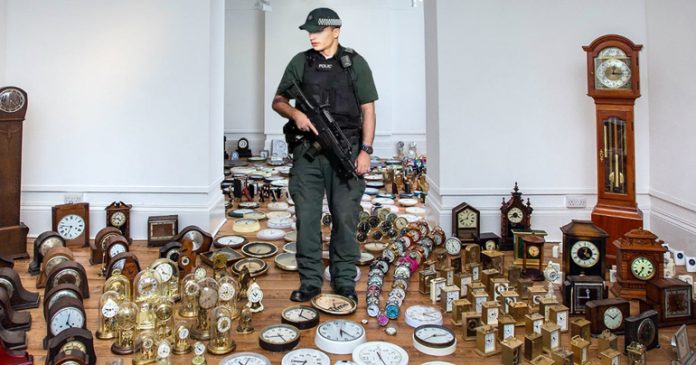 The PSNI had launched a ‘major sting operation’ targeted against alarm clocks and similar devices.

“These items cause untold misery on a daily basis,” we were told by Sergeant Tim Peace from the PSNI’s Clock Squad. “Hopefully this will go some way to alleviating the suffering they inflict on society.”

Fittingly, the operation began early this morning with dawn raids on major dealers.

“Our officers seized nearly 500 alarm clocks in one branch of Argos alone, with a street value of over £20,000,” says Peace. “If these had found their way into our homes they could have devastated the lives of hundreds of people.”

38-year-old Armagh man Nevin Fort told us that he started using alarms when he went to university.

“I was able to control it at first,” he explained. “I’d be setting the clock for 10, maybe 11 in the morning, but when I left Uni I started using it earlier and earlier. These days I could be having my first hit on the snooze button at 6am, and I might need multiple hits before I can bring myself to leave the house.”

Modern technology has made it increasingly difficult for the police to deal with the problem.

“Many people access alarms through their mobile phones these days,” says Peace, “Our cybertime division has removed the software from thousands of phones, but it’s a drop in the ocean.”

“Remember, help is out there,” he assured us. “There is no need for anyone to be alarmed.”

If you, or any of your family have been affected by the contents of this story, you can get help by calling the number 123 from any BT landline, and listening to the Speaking Clock.