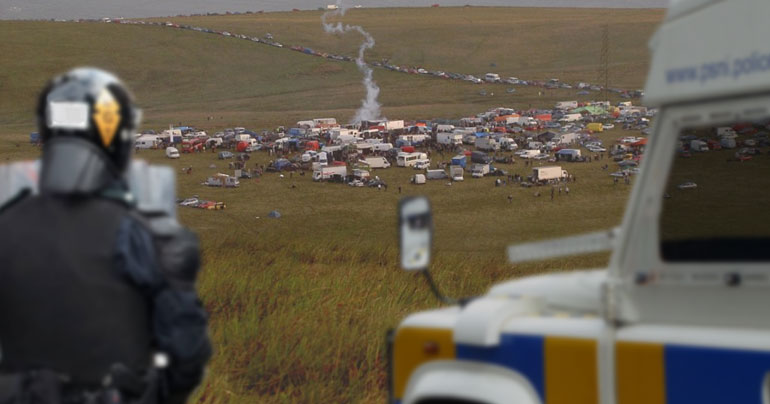 The PSNI has set up a special unit to deal with an upsurge in huge illegal dance events in rural areas across Northern Ireland, The Ulster Fry has learned.

The Division Against Non-legal Culchie Events (known as the D.A.N.C.E squad) was established after 23 country music revellers were taken to hospital with 1st degree foot blisters and dizziness following an illegal jive in Loughguile.

“There were an estimated 3000 culchies attending this event, each consuming their own body weight in tea and biscuits to reach a caffeine and sugar high required to hucklebuck all night,” stated senior D.A.N.C.E officer Danielle Donnell.

“I have a lot of experience with these underground Marquee Jamborees. It’s often very difficult to identify the offending party goers, they sometimes bring up to 8 doubled collared shirts to each gig,” she added.

This task force follows a sting operation 10 months ago, where 1800 people were captured after being lured into a hole in a field in which the Marty Mone Song “Hit The Diff” was played repeatedly on a Sanyo CD Player. At the time police spokesman Hugh O’Duncan said of the captives, “All those arrested were barely able to speak. You couldn’t tell if they were high, drunk or just from Strabane.”

Known as ‘Jivers’, the participants at these ‘hoedown throwdowns’ listen intently to country music radio, where DJs drop clues to the secret venues for the next gathering. Once the location is figured out, the message is soon relayed over CB radio to every tractor in the country.

A spokesman for the Jivers themselves said they were doing no harm to anyone, telling us that they were just a way for “folk to enjoy themselves in the summer”.

“Not during the winter months mind you,” added the unnamed source, “for you wouldn’t be long getting frosbit.”