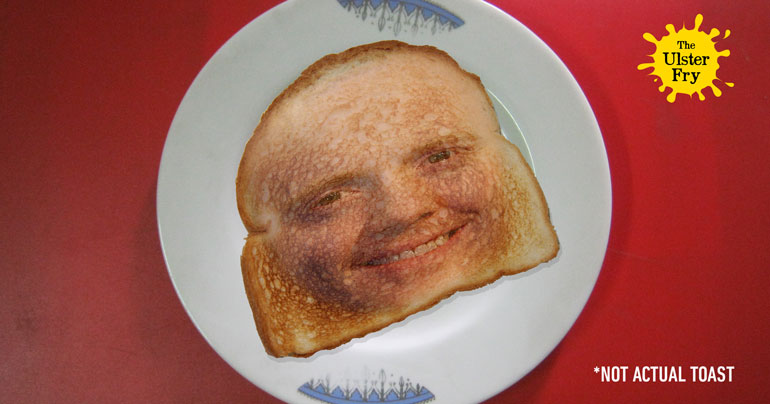 A Ballymena housewife has claimed that the face of cherubic weather forecaster Barra Best SENSATIONALLY appeared on her slice of toast, leading to fears that he may be some kind of Messiah

42-year-old Semolina Pudding contacted The Ulster Fry shortly after her breakfast this morning, and revealed her SHOCKING story.

“I was making breakfast for the children as normal,” said the mother of none, “when all of a sudden I went to butter the toast and there he was, just staring up at me – Barra Best. It was like something out of that movie, the Hills have Eyes, except it wasn’t a hill, it was a slice of toast.”

Sadly Mrs Pudding had no more bread so was forced to eat Mr Best’s face, but she was able to describe it in great detail to our reporter.

“It was kind of browny gingery with a crusty top,” she revealed.

We contacted the Vatican for comment and were told that, although rare, incidents like this have occurred before.

“In 2012 Cecilia Daly appeared to a group of school children in Albania, and just last month a woman in Mexico claimed to have seen Frank Mitchell’s face in her dog’s arse.”

A new religious cult has now sprung up in Ballymena, devoted to worshipping the balding weather god.

“He has come to earth to walk among men,” said Bestafarian preacher Conn Peoples. “We should always remember his sacred words – ‘patches of light rain will be followed by warm sunshine’ – and be thankful.”