Pope secretly “not that keen” on Belfast invite 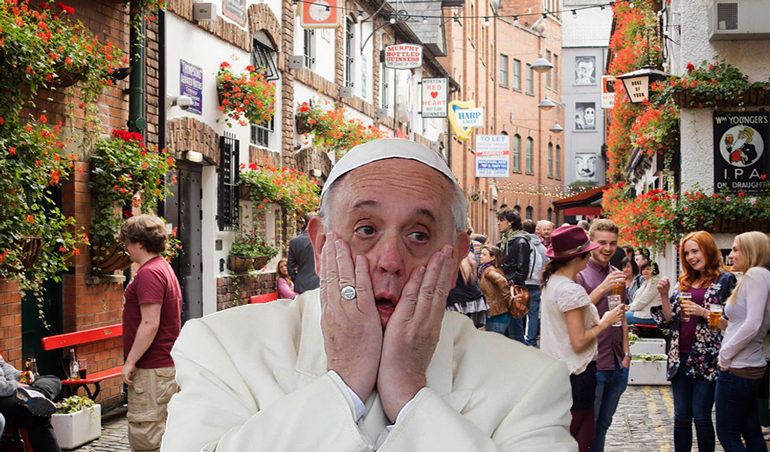 Despite near unanimous support for an invitation to Northern Ireland by local councillors, Pope Francis isn’t really that keen on visiting Belfast, the Ulster Fry has learned.

The Pope will be visiting the Republic in 2018, and council chiefs hope he’ll pop across the border to visit his flock in the North. However despite an official welcome for the invite, we understand that His Holiness is secretly dreading such a trip.

“Francis was over in Belfast with me a few years ago for a stag night,” we were told by a top level Vatican source, “we had a good time like, but when we asked the tour guide to take us to some religious sites he took us to the Cathedral Quarter.”

“So far as I remember there was just the one Cathedral, but a quare rake of bars. We ended up freezing our holes off standing around outside the Dirty Onion, but then the Archbishop of Genoa had one cocktail too many, yacked over his cassock and we were bucked out.”

Unable to get a cab due to the boke covered bishop, it seems that the Pontiff and his clerical companions ended up meeting a group of students, and inadvertently ended up on a minibus to the Holylands area.

“We thought we were on some kind of pilgrimage to Jerusalem, to atone for our over indulgence earlier, but half an hour later we were in the Hatfield getting something you call a ‘carry-out’. Let’s just say it wasn’t the kind of wine our monks make in Italy.”

The resulting hangover has left a bad taste in the mouth for all concerned. “There were a few big heads in the morning, in fact you might call it a Holy Hanlin’,” admitted our man, though it seems Francis is looking forward to at least one part of the trip.

“Aye he’s a big Blues fan,” he told us, “Not the music of course, he just can’t wait to get back to Windsor to see them stuff Cliftonville.”