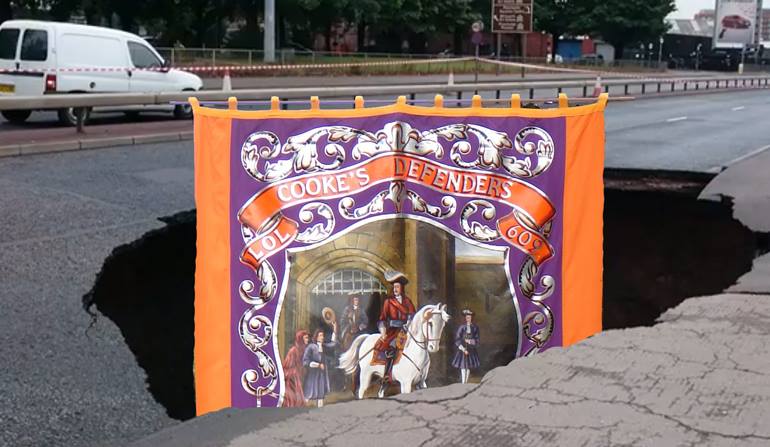 With Northern Ireland’s roads currently making the headlines for having more holes than Peter Robinson’s NAMA alibi, the Grandmaster of the Orange Order William Hollandaise has accused Republicans of deliberately sabotaging the Queen’s highway in an attempt ruin this year’s Twelfth celebrations.

“We tried walking around them to start with,” he explained, “but the detour distances are that vast our members got upset we weren’t taking the traditional route any more and started setting up civil rights protest camps instead! It has to be the work of the Shinners!”

With the pothole crisis literally deepening every day, irate motorists have now got in touch to tell us their stories. “I hit wan on the way to Cookstown yesterday and two fellas in tractors had to pull me out,” explained windfarmer Gusty Weathers. “It’s just as well they spotted me, cos I couldn’t get a phone signal at the bottom!”

It seems the problem is countrywide. “Aye, I had to swerve out of the way of a big massy pothole on the way to Newry,” revealed local gardener, Dennis Compost. “Not only did it scare the bejaysus out of me…  but it was so big I ended up in Warrenpoint trying to avoid it!”

However Sinn Fein have uncharacteristically denied having any involvement in the matter. “It’s probably caused by meteors falling from space,” said Gerry Adams today from the bath. “Or maybe UFOs crashing to Earth!” added Mister Ducky, in Gerry’s voice. “Perhaps those are the wee green men you are looking for!”

At the time of going to press another big hole was spotted on the road between Derry and Belfast. It was reportedly so big that motorists had no choice but to drive through it.

However on further investigation it was discovered to be Dungiven.