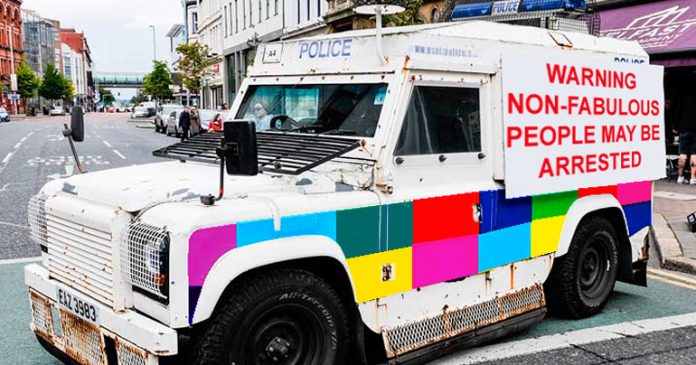 Following an angry reaction to news that a recruitment drive would focus on the LGBT community, the PSNI’s top brass have relented and confirmed that they would try to hire loads of homophobes to redress the balance.

The news had brought the expected objections on The Nolan Show, with many condemning the move as “political correctness gone mad.”

“Next thing you know there’ll be entire squads of Gay police officers,” claimed one caller, who couldn’t remember his name. “How do they expect to control riot situations using only elaborate cushions that match well-chosen curtains? It’s interior decoration gone mad.”

Later, TUV leader Jim Allister hit on an unforeseen problem asking if “officers who claim to be non-binary would be provided with both a male and female uniform, to accommodate their gender choice on the day?”

Chief Inspector Keith N Spector admitted that the PSNI may have got it wrong.

“In our drive to improve equality within our ranks we clean forgot to include people who are opposed to equality,” he told us. “We have listened to the debate and can assure you that we will be reaching out to the homophobic community, by investing in a time machine that will allow us to recruit folk from the 17th Century.”

“There could already be many serving in the force who are closeted about their Homophobic lifestyle. We need them out and proud, ready to serve whatever sections of the community they don’t hate in an un-evenhanded manner.”

The news has been given a cautious welcome among angry people, who have now begun a similar campaign to persuade the Fire Service to hire arsonists.