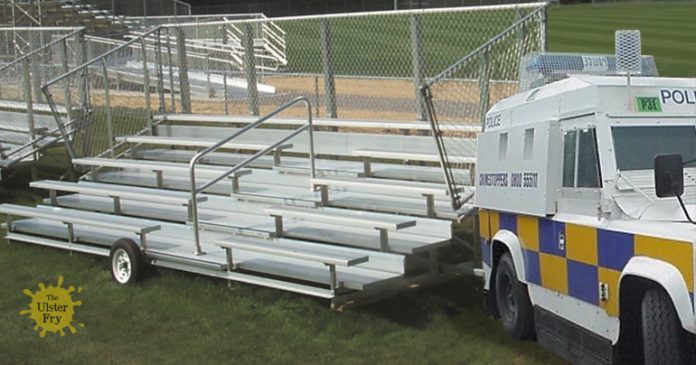 The PSNI has a new weapon in its armoury this summer – specially designed trailers that will see rioters placed on the naughty step until they promise to behave themselves.

Costing almost £100,000 each, the trailers will be placed in flash point areas over the marching season, with officers trained to administer swift, some might say brutal, justice.

Once on the naughty step, rioters can expect severe punishment. “They’ll have to stay there until they say sorry for what they’ve done, and promise not to do it again,” explained Constable. Repeat offenders can expect longer spells of incarceration, before facing sentences escalating to a ban on the consumption of sweet foods and no TV for a week.

Human rights activists have hit out at the news. “These punishments are almost medieval in their cruelty,” said Cassandra Buttock from Amnesty International. “Before long we’ll see a return to the dark days when we gave offenders ‘something to cry about’ by forcing them to ‘feel the back of our hands’.

However the PSNI reject these claims. “Act like a wean, get treated like a wean,” says Constable.