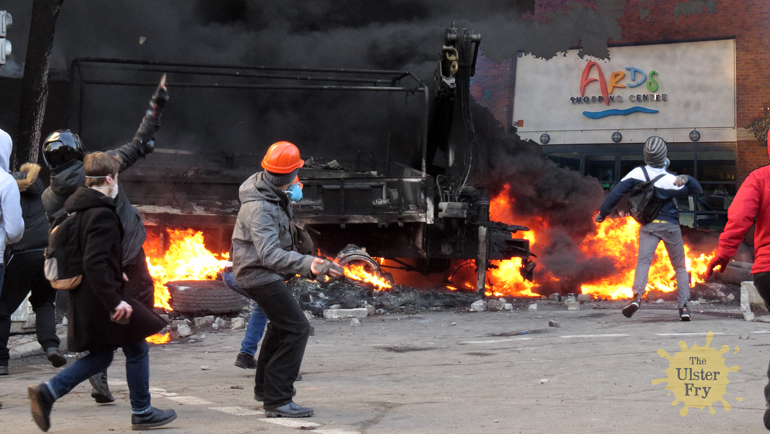 Ards Shopping Centre is ablaze this evening after arguments linked to the Black Friday sales spilled over into violence.

After rioting flared this morning the PSNI was soon forced to admit that its officers had lost control of the situation, and advised shoppers to either avoid the area completely or bring their own weapons as mob rule was in force.

Comber shopper Thomas Cook admits walking over fellow shoppers to get the last remaining Millenium Falcon for his son. “Our Willie’s already got one of these but this will do as a spare,” he beamed, “It was down from £39.99 to £39.49, you couldn’t turn down a bargain like that.”

His friend, Bob Marche, told us that he’d been sleeping in the car park since Tuesday,  just so he could be one of the first people into Poundland. “It was all worth it,” he boasted,  “although I almost didn’t get this pack of 48 AA batteries. I had to wrestle some auld doll in a wheelchair who put her hand on them first’.

“But seeing as how it’s Black Friday, I thought I’d get into the spirit by kicking her shins and then tipping her out of the wheelchair onto the floor.”

We also understand that one woman from the Scrabo Estate broke eight ribs in a crush at the doors of Primark but still managed to get her hands on a pair on pyjamas reduced from £8 to £6. “I had to fracture a few skulls with my walking stick,” she revealed, “but I got these Betty Boop jammies and a Superman onsie for our Cecil.”

Elsewhere two pregnant teens were seen ramming each other with prams outside Claire’s Accessories. 17 year old Sue Zone explained, “I waited all morning to get our Beyonce a half-price tiara and then this tramp tried to jump the queue.”

Speaking from his bed in the Ulster Hospital, a spokesman for the shopping centre has declared the Black Friday sales “a great success”.