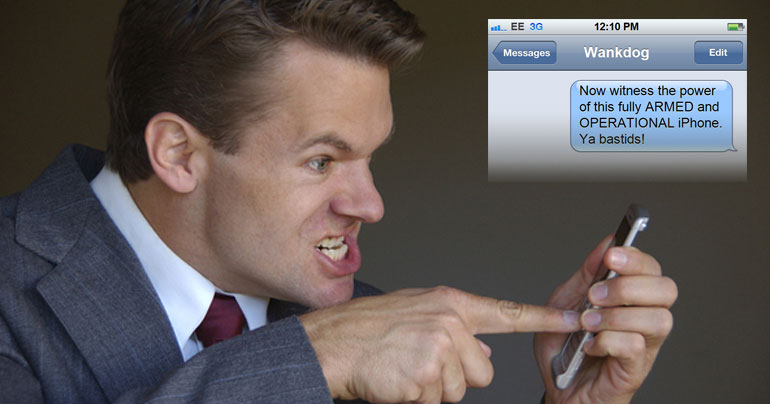 Within minutes of last night’s controversial Westminster vote to commence bombing Syria, local members of the Regional Arguments Force quickly scrambled to their sofas to launch strategic strikes on their perceived opponents – despite understanding very little about what is actually happening.

“It’s time to bomb these bastards back to the Stone Age,” posted veteran Navy blue Vauxhall driver Arthur Harris from the cockpit of his Samsung Galaxy. “It’s the only language they understand, apart from Arabic or whatever shite they talk there, LOLz.”

“Avenge the Paris shootings,” tweeted @bluenose84 from inside his heavily armoured iPhone 6 casing, “they don’t recognise borders, so neither should we. F**king immigrants.”

Across the nation the ravages of war have already started, as supermarkets today introduced ration restrictions so all citizens can get the food they so badly need during the bombardment.

“Aye we’ve had to limit the number of multi-bag crisps, decks of coke and boxes of microwave popcorn that families can bring home” revealed Newtonbreda Tesco manager, Jim Heinz. “Everyone is glued to Sky News watching the airstrikes so our supplies of essential wartime rations are running short everywhere!”

Peace keepers are already on the streets and this morning were firing warning shots from their hi-tech sidearms whilst queuing for bagels and coffee. “We need talks not bombs!” tweeted @Trendy_Liberal, “too many kids will suffer,” she added, failing to offer any alternative method for dealing with ISIS.

At the Facebook front-line, rival troops are stockpiling ammunition for this evening’s bombardment. Consignments of juxtaposition quote memes from the Dalai Lama, Josef Stalin, JFK, Sun Tzu and Hermann Göring were downloaded from Google images in preparation for the battle.

David Cameron has confirmed that he will be reading all of the arguments, but was quick to remind everyone that he doesn’t actually give a shit what we think.