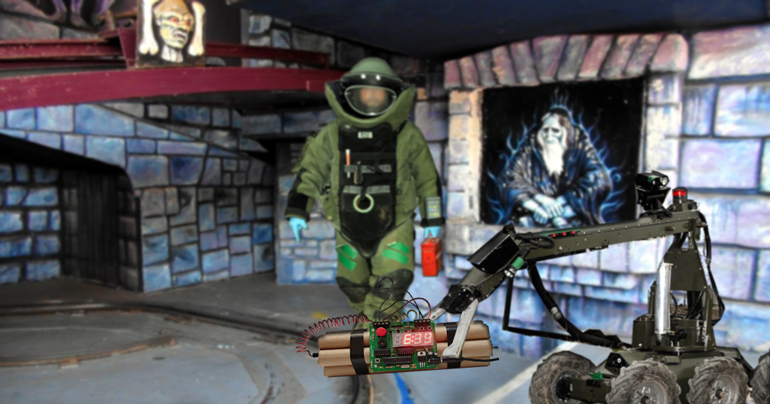 There is a security alert on the line at Barry’s Amusements in Portrush, police have confirmed.

Officers say the track leading into the haunted house may be closed for some time while they ascertain whether it is a viable device.

A spokesman for the PSNI explained: “We thank the public for their patience at this time, as this is a delicate operation further complicated by the fact we’re having wile bother finding a bomb disposal expert who isn’t afraid of the dark.

“To be fair, it’s bloody scary in there.” he added “There’s feckin cobwebs and everything.”

A spokesman for the bomb disposal unit said: “Trying to remember whether to cut the blue wire or the green wire is a whole handlin’ at the best of times, but it’s even more of a pain in the hole when you are trying to cope with luminous cardboard cut-outs whizzing past you going ‘Whoooaaaaaa’ and hacker’s cough cackles coming from behind creaking doors.

“I’m getting the willies just thinking about it.”

Staff at Barry’s had high hopes of a cushy day off because of the security alert, however these were soon dashed when a bus load of children broke down nearby, meaning people actually ventured into the Park, if only to get out of the rain.

“F**k sake” lamented three sibling staff members, Barry, Sam & Hugh Sments. “We were totally just about to skive off and go the Harbour Bar and get pished”

“…and we would have gotten away with it too if it hadn’t been for those pesky kids.”