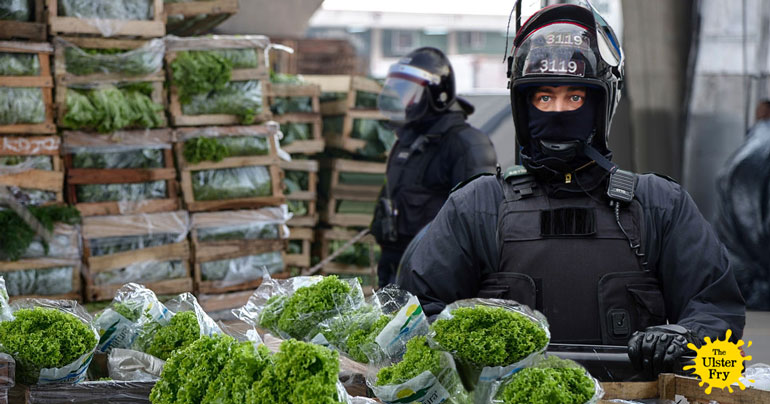 As the world vegetable shortage continues to bite, police on both sides of the border have made arrests after a “significant lettuce cache” was uncovered on a farm outside Forkhill in South Armagh.

It is believed that smugglers with links to the Republican movement have shifted tactics in recent weeks, moving away from diesel laundering towards the lucrative trade in illicit vegetables.

“We received intelligence which indicated that a major vegetable distribution network was operating in the area,” said Superintendant Bryce Berg of the PSNI. “Acting on this information, our officers conducted raids on properties in the South Armagh area. Six suspects have been arrested, and 14 tonnes of laundered lettuce seized along with a number of viable cucumbers.”

Among those in custody is Tobias “Spud” Murphy, a well-known smuggler who security sources claim has been dealing in illegal potatoes since the 1970s. Sinn Fein President Gerry Adams has leapt to Mr Murphy’s defence, telling reporters that “Tobias is a good Republican” and condemning the operation as “indicative of the ‘hard border’ mentality we will face in a post-Brexit Ireland.”

Authorities on both sides of the border are so determined to stamp out vegetable smuggling that they’ve introduced coloured dyes into salad and vegetables, similar to those added to diesel.
At the time of writing over 50 cars had been impounded at the Monaghan border suspected of being full of red or green cabbage.