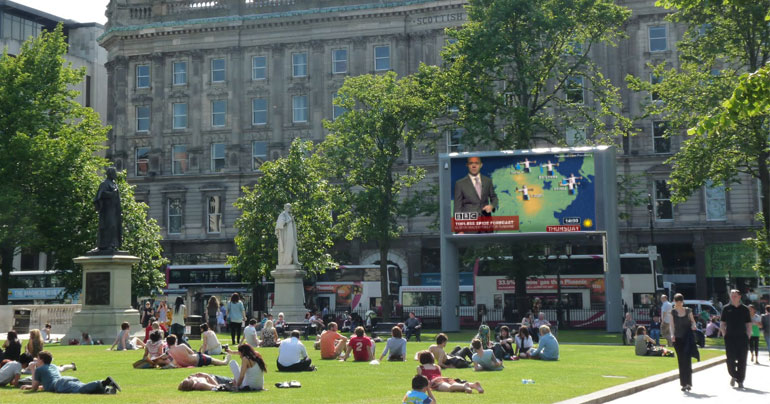 After a lunchtime spent lying on their arse in the sun, Belfast’s office workers were left out in the cold this evening, as City Hall announced they would be reducing the amount of sunny days the country currently enjoys – in a bid to save money cleaning up after them.

Long considered the place to eat your lunch on a rare sunny day, it is reported that Belfast City Hall spent a whopping £3.5m last year disposing of half-eaten ‘meal deals’ that people from nearby offices had either left at their arse or thrown in the general direction of an overflowing bin.

“Aside from being a right pain in the hole to clean up, there is only so much Moroccan cous-cous and pasta smothered in mayonnaise we can take to landfill before it starts becoming a health hazard” said Dick Splash from the Council’s cleansing department. “We tried giving the leftovers to animal shelters to help feed stray dogs, but we had to stop when they started getting wile fussy. Stupidly I had already taken one of the poor buggers home before I realised. The spoilt hoor won’t eat anything now except sushi, hoisin duck wraps and sweet chilli noodles.”

As part of the new cutbacks the big yellow thing in the sky will only float above City Hall on designated days from next week on, reducing the amount of sun NI currently enjoys from ‘laughable’ to ‘taking the piss’. Surprisingly the main political parties had trouble agreeing upon the matter after decades of amicably getting along so well.

“Aye the DUP wanted the 12th of July to be sunny” said Alliance councillor Dave Compromise. “but as that is also one of their designated flag days so they wanted it to be windy too. Then Sinn Fein’s countered with a ‘summery St Patricks day’ and everyone started arguing saying that ‘hell would freeze over’ before they would reach an agreement!”

“But eventually they did.” he continued. “It’s now going to snow during the Christmas Market – which is pretty much the same thing as hell freezing over… except the queues are worse and the beer is more expensive.”

Spokespeople from nearby Tesco, Boots and Marks & Spencer were all unavailable for comment as they were all lying on the grass watching the big TV and eating each others’ meal-deals.