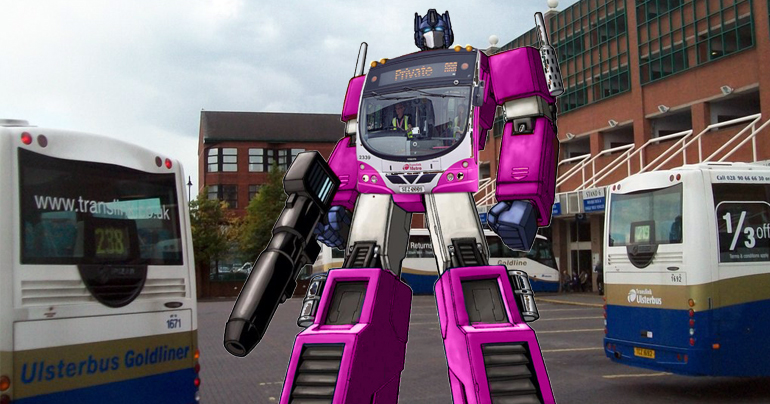 Following a series of diminishing returns at the box-office, The Ulster Fry have discovered that former Autobots leader, Optimus Prime, has been forced to take a lowly minimum-wage job as a Translink Metro Bus.

Metrobus Prime’s exact route is a closely guarded secret at present, but recent sightings of Mark Walberg taking the 57A to Ligoniel have fuelled speculation that the former Cybertron resident may be working out of West Belfast. However the Autobots were quick to hide their tracks, after several sightings of a bus mysteriously turning into a street were reported all across the city.

Universal Studios later released a statement confirming that the aging robot was ideal fit for Translink, saying “He’s a bit rusty now, usually turns up late and is wile expensive.”

This is not the first time stars of the 80’s have moved to Ulster to rebuild their career of course. Readers may recall the infamous golden era in the 1990’s – when Cagney and Lacey worked the counter in Julies Kitchen, Mister-T introduced Coronation Street on UTV and Michael Knight drove a black taxi in Glengormley.