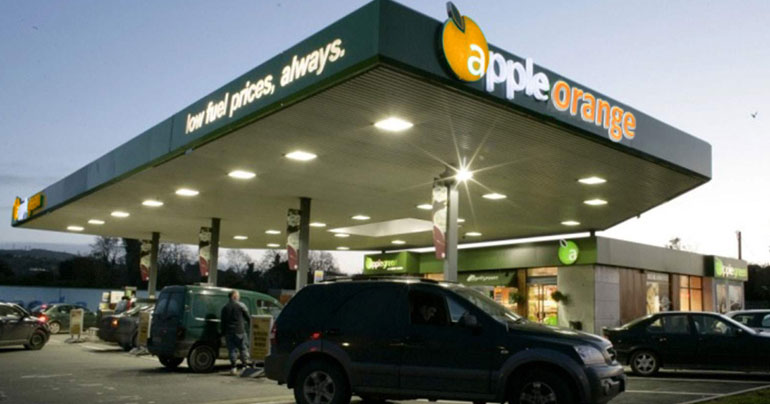 Northern Ireland moved into an exciting new era this week, as the country took a huge leap forward of societal progress – with the opening of a petrol station at the side of a motorway. Apple Green, the roadside services chain with outlets throughout the Republic of Ireland, opened their first North of the border station on Monday, which cleverly allows cars to drive off the motorway, in one end – then out the other.

The revelation has delighted drivers leaving Belfast this week, many of whom have reported their ‘amazement’ at the ability to refuel a car without taking a 20 minute detour through streets lined with spides, Icelands, sectarian murals and grotty bookmakers.  “It’s class!” said local driver Donald Burmah. “and they even take sterling! I actually took Euros just in case” he laughed.

However the new enterprise has not impressed TUV leader Jimbo Allister, who claims that the name ‘Apple Green’  is ‘yet another concession to Nationalism’.  “Seriously! Enough is enough!” declared Allister when we called to his home this morning.

After going up stairs to change out of his pyjamas the TUV chief continued “This new ‘Shared Society’ is supposed to work for both communities, and yet these Republican oil barons now expect ordinary decent Unionists to spend their hard-earned cash financing the invasion of more Irish Green into our wee country!  It’s only common sense and fair that the name ‘Apple Orange’ would be acceptable to both communities!”

The TUV leader is now urging everyone to sign his online petition – ‘Rename Apple Green as Apple Orange‘ – which he hopes will get 100k+ signatures, so he can take the proposal to the Stormont Executive.  “Perhaps your Ulster Fry readers will get involved too!” he added.

Not to be outdone, East Belfast Sinn Fein candidate Niall Ó Donnghaile later announced a proposal to rename Orangefield as Greenfield, where the party hope to ‘drum up’ support amongst working-class unionist voters by offering cheap laundered fuel.

Speculation about a new strain of ‘Orange Diesel’ remain unconfirmed at the time of going to press.