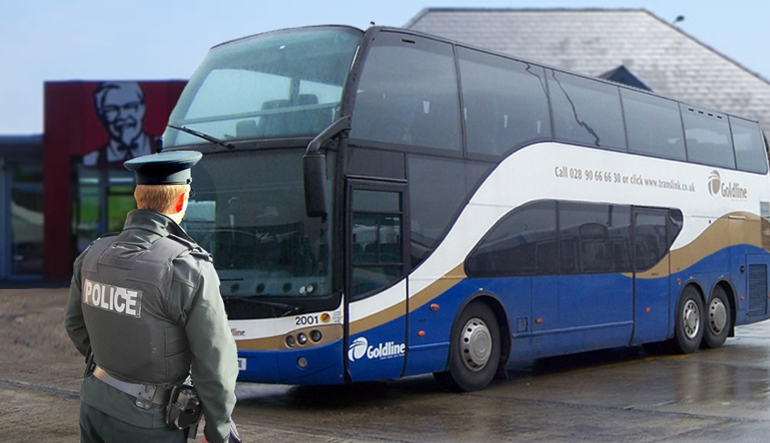 A 45 year old man who hijacked the 212 Maiden City Flyer from Derry to Belfast today was “in wile bother with his missus” according to our sources in the PSNI.

In a virtual mirror image of the more widely reported EgyptAir hijacking, unemployed male impersonator Damien Scunder boarded the bus at the Claudy stop and demanded to be taken to Libya, telling the driver that he was wearing a suicide vest laden with explosives.

Passengers immediately began using the somewhat erratic wi-fi service on the Goldliner coach to report on the developments.

“This boy’s going clean buck mental,” tweeted @Derry_girl48, “says he’s been on the lash since Good Friday and his wife’s going to kill him #AnotherGoldlinerHijack.”

It appears the driver told Mr Scunder that Libya was not on his route and that he could only take him as far as the Europa Bus Centre, but that if he wanted he could drop him off at Castledawson and he could try to get a connection to the airport. However once there the bus was immediately surrounded by the PSNI, who by coincidence were parked outside the big branch of KFC, again.

“Peelers all over,” tweeted passenger @yermaskeks, “some of them have even drapped their chips. #BusHijackKFC.”

A tense stand-off followed, during which the hijacker made a series of demands including requests for a Bargain Bucket with extra beans and a signed photo of Pamela Ballantine, before officers finally brought the crisis to an end by boarding the bus and surrounding him.

At this point it became clear that Mr Scunder was not, in fact, a hijacker. His ‘suicide vest’ was actually a string vest and that he didn’t really want to be taken to Libya, he wanted to go to Limavady.

Everyone on the bus has been arrested and charged with wasting police time.