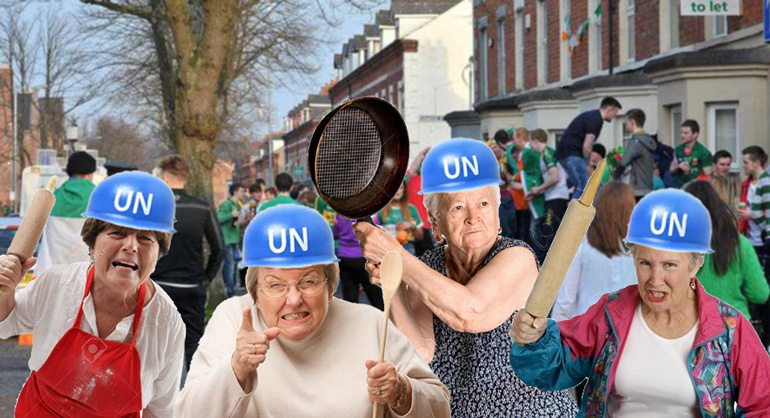 With the Holylands area of Belfast once again awash with St Patrick’s Day vomit, we can reveal that the United Nations is to send in a  Peacekeeping Force of Tyrone Mammies in an attempt to diffuse tensions.

The students began their annual celebration of the apostle of Ireland late last night, gathering in the streets to vandalise cars and fight each other in a traditional and inclusive manner, before complaining that the police were spoiling “the craic.” The “party atmosphere” has continued this morning.

“Sure it’s mighty craic altogether,” we were told by 20 year old Ben Burb, a student of Anti-Social Behaviour at Queens, as he squatted in his neighbour’s garden having a shit, “It’s typical of the police to wade in and ruin it.”

His girlfriend Donna Managh, who studies shoes at the University of Ulster, complained that students were getting a bad name. “It’s all a bit of harmless fun,” she told us.  “We weren’t doing anyone any harm and sure we’ll all bunch up to fix the cars and windows we broke.”

“As soon as our next student loan comes in” she added.

However police are now confident the rest of St Patrick’s Day will play out more peacefully after the UN intervened this morning.  Several buses of mammies from Tyrone have just arrived in the area, and are understood to have already begun deploying anti-anti-social behaviour measures.

At the time of writing several students have had the legs beat off them with a wooden spoon, whilst riot police are also understood to have sanctioned the use of quare clip round the ear, a good skelping and a wile fierce telling off.

Should this not be sufficient however, police do have a contingency.

“We’ve got a bus load of Tyrone daddies in reserve” explained Sergeant Tim Brass. “they’ve all got their leather belts at the ready…. and good boots in the hole have been authorised”