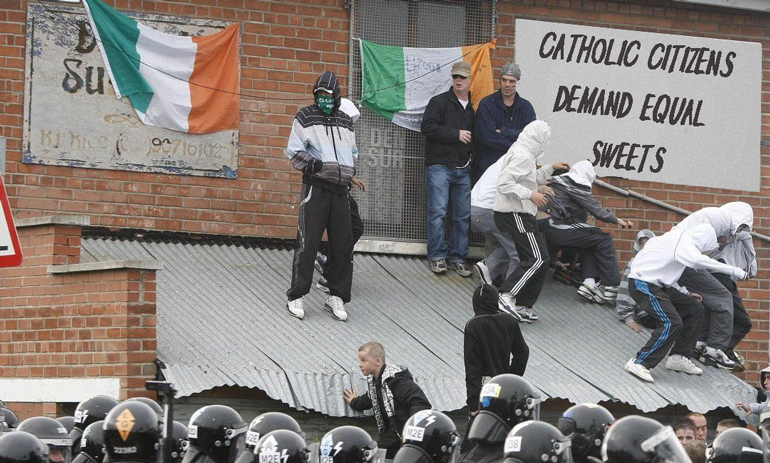 There has been widespread rioting in Nationalist areas of Belfast today as disgruntled Catholics reacted angrily to the news that it is already Lent.

It is understood that the trouble began in schools when pupils found themselves getting marked with that wee cross thing on their foreheads, and soon spread to the adult population.

“How the f**k can it be Ash Wednesday already?” asked an angry Brad-Ray Pio from Divis Street, as he set fire to a sweet shop. “I’ve only just got over dry January and suddenly I’m expected to give stuff up again. It’s only the start of February FFS, it’s enough to make you want to turn Jaffa.”

Not having to give stuff up for Lent is one of the key tenets of Protestantism, explains Pastor Calvin Knox, from Ballylumford Bible College. “Under the rules of the Reformation there’s no need for any of that auld shite, in fact many of us do extra stuff at Lent just because we can – last year I took up smoking for the duration.”

“It’s a wee bit like back in the day when Catholics didn’t use contraception,” he went on, “I used to wear a condom all the time, even to work, out of pure Prodness.”

The Protestant churches are indeed reporting a flood of new converts, with some taking advantage of the situation by organising relief convoys to Catholic areas.

“I’ve a van load of chocolate and cigarettes heading west this evening,” said Pastor Graham McDonnell from Whitewell Meterosexual Tabernacle. “Things are truly desperate for them, in some areas our people are throwing Mars Bars over peace lines to help them in their hour of need.”

Pope Francis has appealed for calm, reminding his flock that Lent only lasts 40 days and that they can all still get blocked at Easter.

“That’s hardly worth turning Prod for, is it?” he asked. “Sure you’d never get to have a go on the swings of a Sunday.”