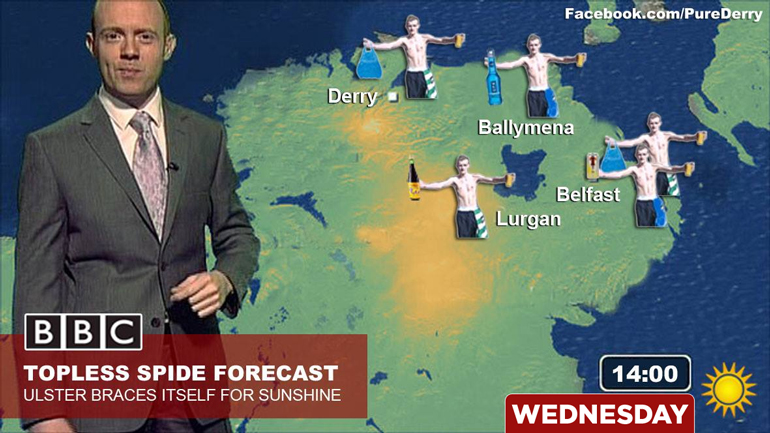 The UN has stepped in to quell the overexcited behaviour that has seen people across Northern Ireland shed multiple layers of clothing at the first glimpse of sun.

“There was a right frost his morning,” warned UN Secretary-General Ban Ki-moon, at a press conference at the Titanic Centre. “Just because there’s a drop of sun doesn’t mean it’ll still be warm when you head home later.”

“It’s still only April, and the chances are you live somewhere like Lisburn or Derry, not Lisbon or Dubai.” he concluded. “In short, or in shorts, catch yourselves on.”

Mothers across the country have welcomed the intervention, after many spent a harrowing afternoon watching their kids come home from school with jumpers round their heads and trousers rolled up to the knees. However it seems that many local people are refusing to heed the advice.

23 year old Tullycarnet man Chuck Naked told us that he’d been ‘dressing for the weather’ since he woke at 6am. “It was minus 2 when I got the bus but I thought f**k it, the sun’s out, so it’s taps aff tae f**k.”

“It’s an ideal chance to show off my new ink,” he continued, showing us an impressive tattoo depicting the Queen scoring for Rangers in a penalty shoot-out against Celtic.

In the North-West, Strabane man Sean O’Naturel had a similar attitude. “I was caught out by this turn in the weather, and all I could find to wear to work was a pair of Tyrone GAA shorts from 1985. You know the wans, showed more balls than the match highlights.”

Sadly Mr O’Naturel works in Bank of Ireland and was sent home after a colleague reached for a money bag and got more than she bargained for.

According to experts the outlook for the rest of the week remains good. “Sunny ’til the weekend,” revealed UTV weather terrorist Frank Mitchell, before baring his arse as part of an elaborate clue to a local place name.

“Can you guess where the weather watching camera is tonight?”