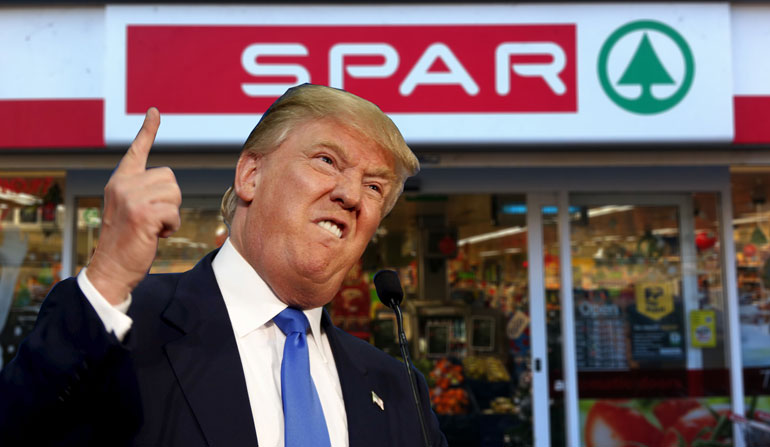 After confusing terrorist attack 9/11 with supermarket chain Seven-Eleven yesterday, US presidential hopeful Donald Trump has sensationally made several further shop-related gaffes today – leading to speculation that local supermarkets are funding his race to the Whitehouse.

Speaking on CNN Breakfast this morning, Mr Trump told anchor Mike Boom that he thought “The Spar on Terror” was totally justified despite the fact the Bush Administration never found any “Weapons of Mace Destruction”.

His bizarre actions have now led investigators to check footage from his presidential race for further opportunistic brand placement.

“Aye, it turns out he’s been talking about the ‘Centra Intelligence Agency’ for over a year FFS!” admitted Charlie Bravo from the U.S. Department of Defence. “And it’s not actually a ‘wall’ he wants to build between us and Mexico, it’s a huge Walmart! The crafty hoor!”

“The sly fecker has been talking about cutting back the U.S. budget deficit using ‘CostCutters exercises'” revealed Larry Bachowski from Reuters. “And his entire foreign policy revolves around taking a ‘more Co-operative approach’… which if you actually read the small-print, simply means selling vastly overpriced fruit and veg whilst constantly putting multi-packs of sweets, crisps and chocolate on ‘special offer’ so your enemies will get fat as fuck!”

However Mr Trump was unrepentant. “It was just a lidl slip of the tongue, “he declared