Zoe Salmon captured and put on display in Exploris 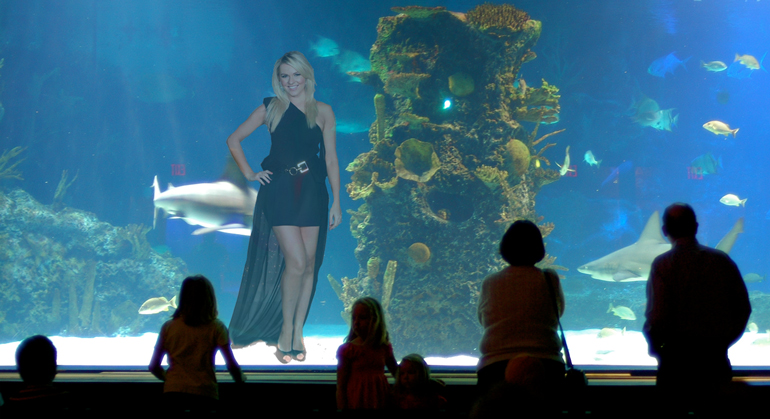 The Ulster Fry has learned that the glamorous star was caught by fishermen while swimming off the Bangor Coast, using a large net and a lucrative modelling contract as bait.

“Here at Exploris we’re committed to providing the ultimate visitor experience,” said the aquarium’s director of exhibits, Anglelica Turbot. “Our experts are seeking out the best and most interesting aquatic creatures, and of course Zoe Salmon was top of our wishlist. Visitors might even get to the chance to stroke her if she swims close to the surface.”

As well as Ms Salmon, Exploris have also managed to net several other top stars with vaguely aquatic connections, including Michael Fish off the weather, comedian Richard Herring, Fish out of 80s rock band Marillion and Scottish First Minister Nicola Sturgeon. We understand that the singer Seal is also being nursed back to health in the rescue centre.

Critics have said that capturing celebrities and putting them on display is cruel and degrading, but Ms Turbot denies this. “Many of these stars are on the brink of extinction,” she told us. “We’re playing an important conservation role, as well as educating the public on just how rich and varied our celebrity fish heritage is.”

Exploris reopened yesterday after a £2 million refurbishment. Rumours that the comedian Jake O’Kane has changed his name to Hake in the hope of getting free board and the occasional stroke have so far proved unfounded.