Next FIFA Game To Include Bribes 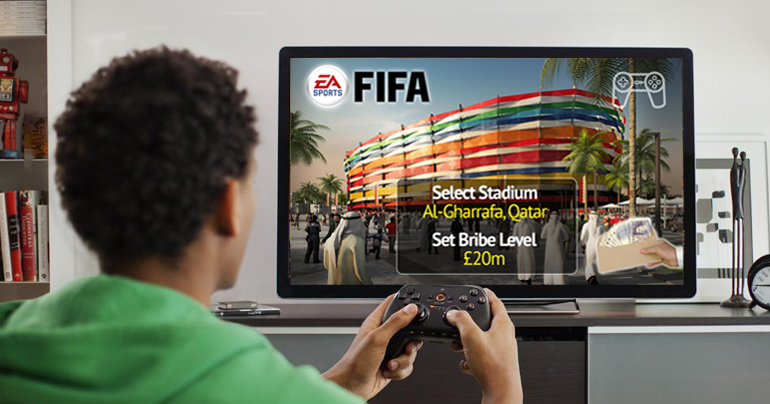 Fans of ultra-realistic console gaming were overjoyed today, after game developer, Electronic Arts, announced that the next FIFA game would include a revolutionary new ‘bribe’ system, allowing gamers to magically host football tournaments anywhere they wanted.

Players on both Playstation and Xbox will soon be able to throw international multiplayer tournaments in their preferred country, simply by offering FIFA delegates a range of incentives including champagne receptions, envelopes stuffed with cash, favours for friends and even death threats.

“Yeah it’s pretty groundbreaking” admitted Eoin Morris, a EA local game-tester. “It took me a while to get the hang of it, but watching the World Cup opening ceremony at the Ballymena Showgrounds made it all worth it!’

“The final at the Brandywell was great too.” continued Morris. “I scored a belter 40 yard effort with Kyle Lafferty to take the lead, but then Messi scored a hatrick in the second half.”

“The jammy wee bastard.” he added.

The game also includes a new Farmville style ‘Stadium Builder’ which allows players to project manage the erection of new stadiums, with extra points awarded for hosting tournaments in unplayable 40° degree heat and the number of immigrant workers who die during construction.

EA have since been heavily criticised by technology journalists however, after a comprehensive 360-page Press Release of the game was suspiciously condensed into a 42-page summary.

England were reportedly to blame.