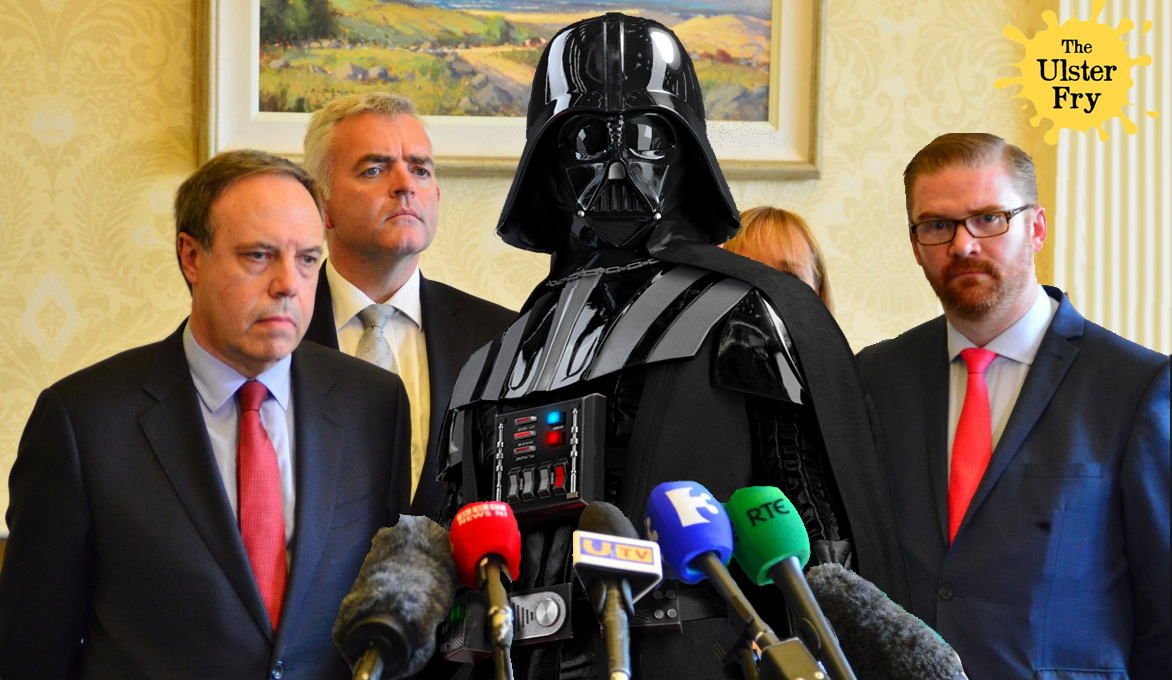 Northern Irish political experts are said to be reeling after the DUP selected evil fictional character Darth Vader as the new leader of the party.

The Ulster Fry understands that Mr Vader had travelled to Belfast to attend the première of the latest Star Wars movie, but took a few hours off to “explore his dark side” by attending the DUP leadership bash in East Belfast.

Soon after his arrival, it appears that previous favourite Arlene Foster mysteriously decided she didn’t fancy  the role after all, and was last seen climbing into a taxi muttering “these aren’t the Prods I’m looking for.”

Mr Vader was immediately co-opted as an MLA, having of course received a generous pay-off for standing down from his role as special advisor to the evil emperor. The Dark Lord of the Sith then addressed the party faithful. “Look, I am your First Minister,” he declared, before outlining his vision for a revitalising Northern Ireland’s ship building industry with the commission of a new Death Star.

However the new leader’s first task will be to rally his party for the forthcoming Stormont elections, with some observers doubting that he can repeat the success of his predecessor. “I find your lack of faith disturbing,” he told journalists. “It is our destiny. Join me, and together we can defeat the Rebel Alliance in East Belfast.”

American business mogul Donald Trump was also believed to be a late contender for the position, but concerns were expressed by DUP members over his recent outbursts.

“Some of his views are a bit extreme, even for us,” a party insider told us, “but we could have got over that, if he wasn’t running on a Republican ticket.”