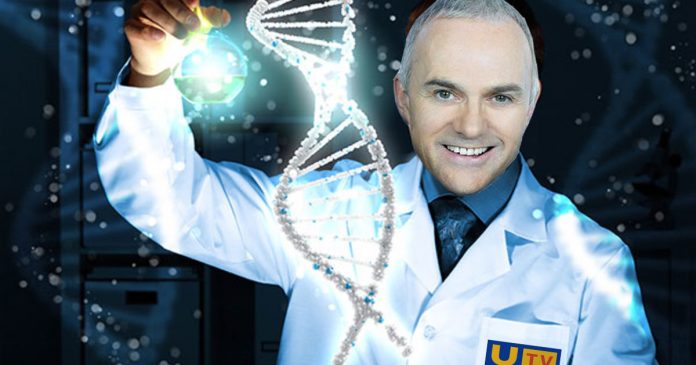 “It was either him or Brian Cox,” explained top scientist Tess Tube. “But to be honest we’ve all seen enough Cox on our TVs recently, what with Game of Thrones and the like, and no one knows more about Black Holes than Frank Mitchell.”

“He’s spent years standing in front of a map trying to get the unwitting public to guess which arsehole of the universe his weather watching camera was exploring.”

Whilst the world says goodbye to one of the most celebrated thinkers ever, weatherman Mitchell claimed he was ready to step up to the challenge.

“Hawking may have been the Lucasian Professor of Mathematics at Cambridge University,” explained Mitchell to his U-105 listeners. “But although everyone respects my knowledge of how rain and sleet showers n stuff work, my own academic prowess as an educator is often overlooked!”

“Mostly how to be cute when saying culchie stuff and giving their parents a redner,” he admitted. “But still!”

However Mitchell may face ‘stiff’ competition from DUP MP and self-proclaimed maths genius, Sammy Wilson, who once served as Minister for Finance in the Stormont Executive.

“Sammy’s certainly the smartest of our MPs,” said a DUP insider, “he’s even working on his first book, A brief shit story of mine.”