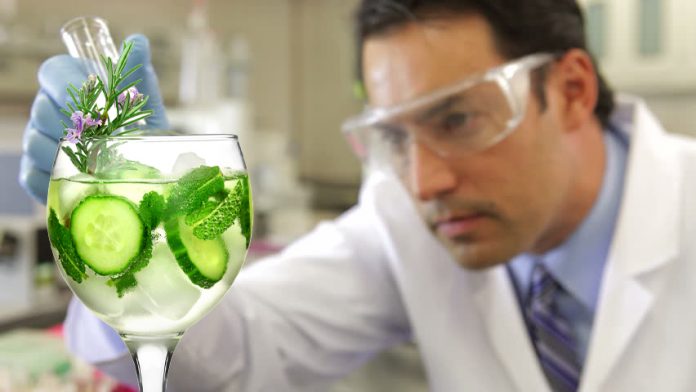 Following years of research and development by emotionally unstable, passive-aggressive drunks, experts have finally recognised gin drinking as a new branch of science.

“Consuming gin is now so complex and sophisticated that you need masters degree in chemistry to make one….plus specialist expertise to actually order it in the first place!” explained Professor Jim Fizz from Queens University’s Department of Inebriation.

The practice has become so advanced that many bar staff have put themselves into crippling debt trying to stay qualified.

“Knowing which swanky gin, goes with which colourful garnish, in what shaped of glass, with whatever flavour of designer tonic water takes years of studying,” admitted local barman, Dr Jimmy Hendricks, Phd.  “There are over 32,000 possible combinations so far, and scientists are discovering new ones all the time, My head’s pure fried with it!”

However his customers remain as enthusiastic as ever. “I had an absolutely gorgeous new gin cocktail today” revealed local hipster, Jon-Jay Sapphire.

“It was a new small-batch homebrew rhubarb gin from East Hertfordshire, served in the disused glass door of an up-cycled 1980s retro washing machine, garnished with a Sicilian blood orange and a slice of Parma ham – then splashed with a generous serving of elderflower tonic water and crushed ice”

We later bumped into Jon-Jay’s da supping a pint of Harp in a pub down the street and he confirmed that his son was a dick.