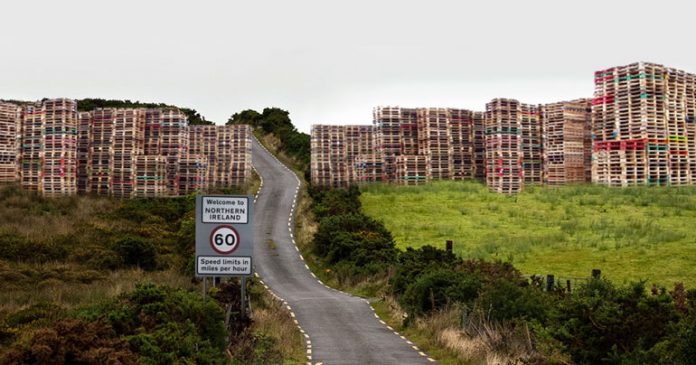 With Brexit just hours away, the UK government is considering the construction of a huge wall of pallets along the Northern Ireland border as part of its Brexit strategy, The Ulster Fry has learned.

As our slightly poor artist’s impression shows, the structure will be up to 30 pallets high in places, with small gaps to allow people to look at sheep that live on the other side.

“We decided to take a different angle on the whole ‘customs’ border thing,” said a senior Tory. “We know that you lot have a custom of collecting pallets in the summer, so thought this wall might blend into the landscape. Plus you can burn them once a year.”

The pallet wall is one of a number of ideas proposed by the government today, which they claim will maintain a seamless border on the island. These include:

The Irish Government is also said to be considering a ‘cultural customs’ border, with a plan to build a wall formed entirely from massive GAA sportsbags and people doing Riverdance.

No one from the Stormont Executive could be arsed commenting.