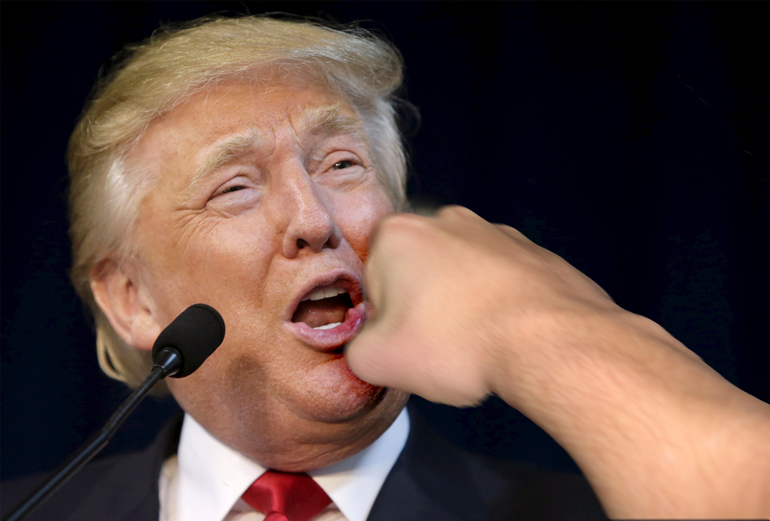 A County Armagh man has has travelled to the USA to make a unique offer to the people of that troubled country – to personally knock the smug look off Donald Trump’s fat face.

48 year old Declan Flannery arrived in Washington early yesterday morning, and is understood to be “looking for a lift to wherever Trump is” so he can administer a severe beating.

Before he left for the States, Mr Flannery told the Ulster Fry that he’d been troubled for some time by an age old philosophical question. “If you could travel in time, would you go back to 1933 and kick in Hitler’s ringpiece?” he asked us. “In my opinion, if the Nazi leader had been given a severe boot up the hole before he seized power we might have avoided World War Two.”

“It’s difficult for the American people to deal with Trump so I’ll knock his pan in for them,” he continued, “Then I’ll stick every brick of that wall he’s always on about up his cavernous arse, and make him pay for it.”

This is not the first time that the former farm labourer has offered to physically assault an international political figure. In 1989 he was widely credited with bringing down the Berlin Wall after he ‘battered the melt’ out of East German dictator Erich Honecker.

For now, however, Mr Flannery must wait on the decision of the American people. “I can’t go around kicking the shite out of people without a democratic mandate,” he explained “I’ll have to wait and see how many likes and shares my ‘I’ll knock Trump’s pan in’ Facebook page gets.

A spokesman for America told us that they’d consider the offer, but there was a long queue of people wanted to punch the presidential hopeful’s gub “and Mr Flannery must wait his turn.”