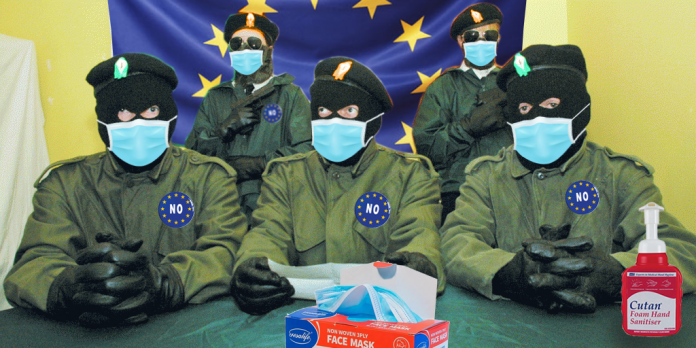 After threatening restrictions on Northern Ireland’s supply of COVID-19 vaccine last night, terrorist groups across NI have dramatically united to wage a joint war on the EU.

“They may have backed down at the 11th hour – but we need to be ready to take the fight to Brussels incase they act the ballix again” explained Enda Scope from newly formed dissident terror group, Republican Action For Drugs.

This was a view echoed by one of his Loyalist counterparts. “It’s a disgrace what they nearly did. If they mess with our drug supply again, we’ll show the bastards” raged Dee Fibrilator, from the EU.V.F.

His Loyalist comrade was in full agreement. “Aye that there what he said there now is spat on, so it is.” added Andy Sanitiser from the Clean Hand Commandos.

Other Republican terror groups including the I.N.L.Asymptomatic and the Real Pfiz R A are also standing-by ready to resume activities across the European Union.

“We’ve been blowing up the Europa for years in preparation for this” explained a Republican spokesman.

However one group has appealed for calm and urged fellow Pharma-militaries not to leave the house to carry out any operations incase they spread the virus even further.

“We just can’t take the risk lads. We need to stay home, wash our hands, stop the spread and help the NHS as much as we can!” pleaded a spokesman for the UDR-rate.