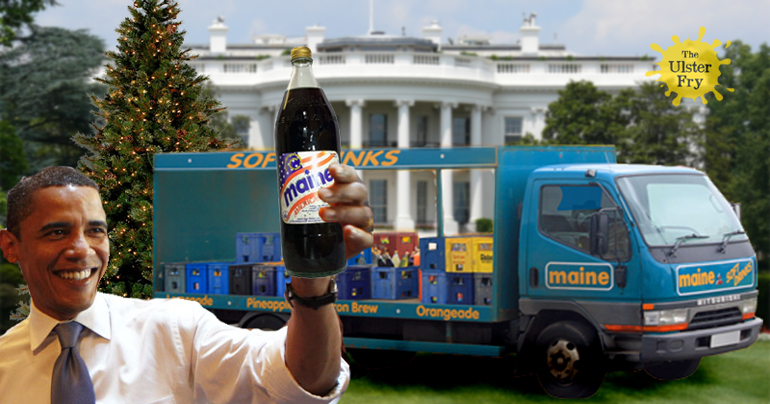 US Politicians set aside their differences today to welcome news that the famous Maine Lemonade Christmas lorry had finally arrived in their divided country.

“Your Maine Lemonade is part of the fabric of an American Christmas,” outgoing President Barack Obama told The Ulster Fry. “The founding fathers of our great nation drank it on the Mayflower, even going so far as to name a state after it when they arrived.”

“Me and Michelle have a special fondness for the American Cola, it even has the name of our country in it!” he continued. “I have it with a wee vodka on a Friday when I get home from being President, while Michelle likes a dash of it in her Buckfast.”

Republican Presidential hopeful Donald Trump took time off from being a big racist to praise the iconic drink. “White lemonade for me, none of that auld brown stuff,” he told supporters in Colorado, before announcing new plans to make America great again by invading Canada.

His Democratic counterpart Hillary Clinton is also a fan, sending us several emails singing the praises of the Bubblegum flavour,  then told us to delete them immediately afterwards.

Meanwhile back in Northern Ireland, a small US firm called Coca-Cola also revealed that they’d be sending some kind of truck over here this Christmas, but no-one really cares because we’ve got McDaid’s Football Special.