The Ulster Fry guide to the US Presidential Election 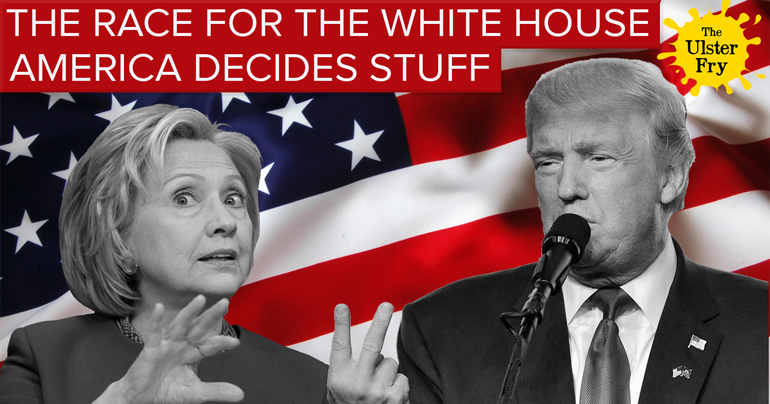 As you may have noticed, for it’s been on the news, there’s some kind of election in America.

It seems to be quite important so we’ve been looking into it.

It’s to see who’ll be President of America – a large country off the coast of Donegal. The President’s a bit like our First and Deputy First Ministers rolled into one giant Minister. Just imagine how important that is, and what it would look like.

Who are the candidates?

The Republicans have accidentally picked Donald Trump, a multi-millionaire who made his fortune by inventing Top Trump cards. He used to do the American Apprentice but stopped to devote himself to being a full-time F**kwit.

The Democratic candidate is Hillary Clinton, whose dad was President back in the 1990s. She also used to be Barack Obama’s Secretary.

Do they have Irish ancestors?

Probably not, but they will.

What will they do if they win?

Trump says he’ll help the poor by making the rich pay less tax. He’ll support the construction industry with a massive wall building programme, which the Mexicans have kindly agreed to pay for. He’ll also send immigrants home, except his wife.

Clinton says she’ll make the rich pay more tax so that poor people can get sick for free. She wants to create jobs by employing thousands more in the FBI to read emails for her. She doesn’t mind immigrants – which is just as well as half of Ireland might get sent home if Trump wins.

Both want to bomb people. Clinton wants America to do most of the bombing but Trump can’t be arsed and wants to let Russia do some of it.

Mrs Clinton is a woman, isn’t she?

Yes, she is. If she wins she’ll be the first female president. Trump isn’t a woman, though he does know some and knows how they feel, intimately.

Do they have any skeletons in their closets?

Clinton is always in bother about her emails – she sends thousands and won’t let anyone read them, so she may be a Nigerian scammer. Trump has had to build an extension onto his closet for all the skeletons. Basically, he doesn’t like paying tax but would grope your granny.

No-one is sure, Clinton is slightly ahead in the polls but it’s a two-arse race that could go either way. For Americans it’s like deciding which colour of shite they prefer.

What will it mean for us?

Hopefully this’ll help clear up any confusion and give our American readers a few pointers before they vote. As for the rest of us – we should just be glad that we live in a democratic system with no corrupt, racist or slightly insane politicians who’d say anything to get elected. We’d never vote for anyone like that.