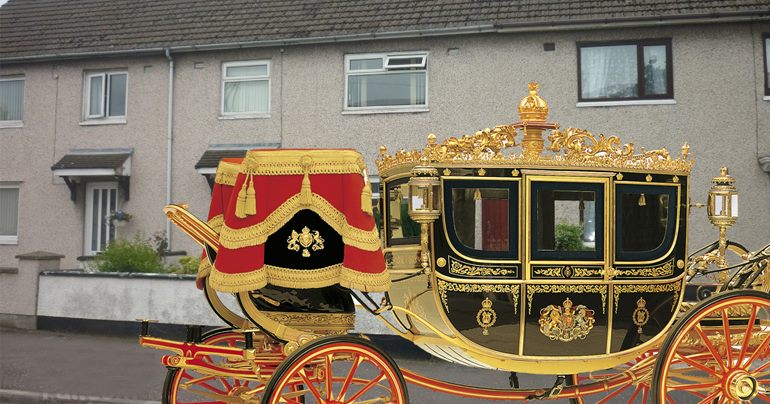 Prince Charles has landed himself in hot water after confessing to journalists that, joyous as it is, the birth of the new Princess is part of a plan hatched by William and Kate to climb the housing waiting list in East Antrim,

Speaking from on top of a horse, the Prince told a select group of newspaper hacks that the Duke and Duchess of Cambridge are keen to move into a four bedroom house in Carrickfergus, and are hopeful that a new baby would force the hand of council officials. “Aye they’ve had their eyes on this place for a while,” he revealed, “William fancies a fourth bedroom for when Harry and the lads come over. This new wean will give them a bit of a boost.”

In a revealing interview, Mr Charles also said that the Royal parents will be straight down to the local dole office to see if they’re entitled to any more benefits. “They’re already getting £20 quid a week in child benefit for wee George, so there should be another £14 or so coming their way for this one, that’s for definite. Hopefully they’ll be able to get a grant to help buy some stuff for the baby, you know – cots and shite.”

“William has cut his hours right back so he should be able to claim more tax credits, and Kate reckons she has a bad back now so we’re looking into DLA. There might even be a car in that.”

The news has been welcomed by most people Carrickfergus, with work commencing of a new mural of the baby – entitled “Princess of Farts” – in the town’s Castlemara estate. However some residents are concerned that the arrival of the Royal couple will spark an immigration boom.

“I love the Queen as much as the next man, but should be local homes for local people,” said Woodburn man Darren Brown, “and this’ll be the thin end of the wedge. Before you know it, half of Europe’s royalty will be living here, talking foreign posh and clogging up the clinics. Enough is enough.”