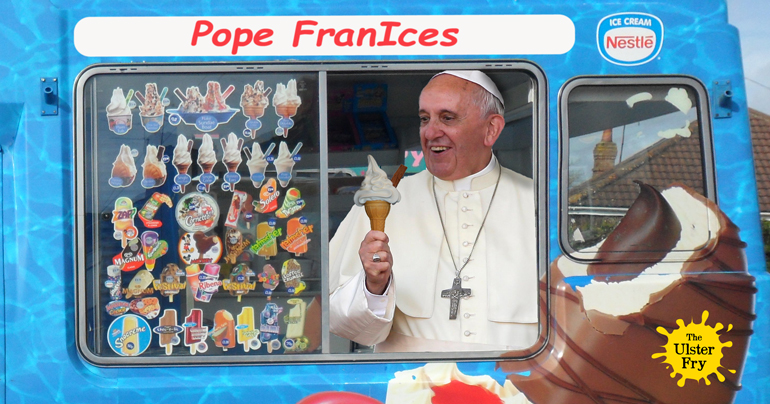 The Pope is set for a highly unusual tour of Ireland in 2018 after an unfortunate clerical gaffe saw the accidental purchase of a humble ice-cream van to replace the world famous Pope Mobile.

“Turns out his new secretary is from Ballymoney,” we were told by Cardinal Gino Ginelli, “when he saw that we wanted a new Pope Van he thought we meant Poke Van, so instead of something with a big dome on top we’re getting a big cone.”

Rather than demand a replacement, the modernising pontiff is understood to be thrilled at the news, seeing it as an opportunity to reach out to the masses through the medium of ice-cream, and Ireland will be the first country to get a taste.

“We’re building his tour around traditional spots for buying a poke,” says Ginelli. “You can expect to see him travelling round Dublin housing estates for starters.  We’ve already rewired the van to play the Angelus bells.”

Francis will eventually land at Scarva in July, where the Catholic authorities have booked him a lucrative pitch at the Sham Fight parade. “He’ll get the chance to cheer on King Billy, just like his predecessor in 1690,” claims Cornetto, “and he’s bound to go down well with those bands you have – the ones that love ice-cream.”

The Vatican secretary has confirmed that several “Lick The Poke” bands are booked to play at the event.