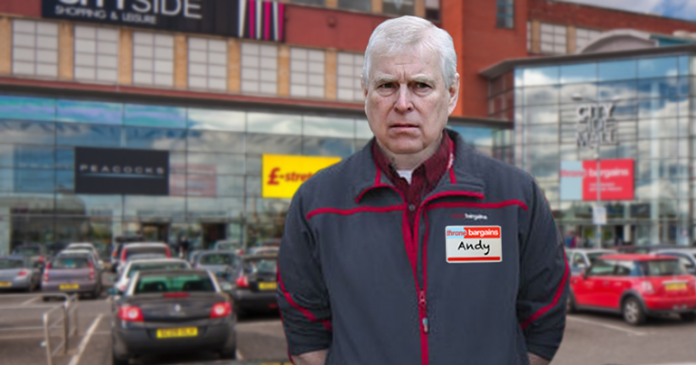 With the ink not even dry on his out-of-court settlement in the US, the Queen has moved quickly to distance Buckingham Palace even further from disgraced Prince Andrew by demoting him to the position of ‘Duke of Yorkgate’, the Ulster Fry has learned.

“He can no longer use the prestigious ‘Duke of York’ title” confirmed palace spokesperson, Willy Andover-Cash. “Instead Her Majesty has deemed it fit that he spend the rest of his days in service of a small area of North Belfast where one might acquire cheap bog roll, discount pjs and out-of-date multipacks of sweets and biscuits.”

“She did offer him something in the city centre” he continued, “but he said he’d prefer to settle away from Castlecourt.”

Throne Bargains have confirmed that the Prince had already started undertaking his new duties – and would now be serving the great British/don’t dare call me British public direct from their Yorkgate store.

“Aye, he started this morning!” store manager, Sue Pernoodle told us. “We’ve even managed to give him his beloved HRH title back, as he’s now our Head of Refrigeration Hygiene,” she revealed as she summoned the Prince to a clean up on aisle six.

“We originally had him stacking pizzas” she continued “but he kept getting flashbacks to some incident in Woking. He seems very capable though, cos every time we ask him to do something he says, ‘No sweat.'”

Nearby pub, ‘The Duke Of York’ has added further embarrassment for their former namesake, by revealing that he’s not welcome at their establishment for after work pints.

“Naw he can do one!” confirmed bar manager, Havana Jameson. “And he won’t be getting into The Crown either”