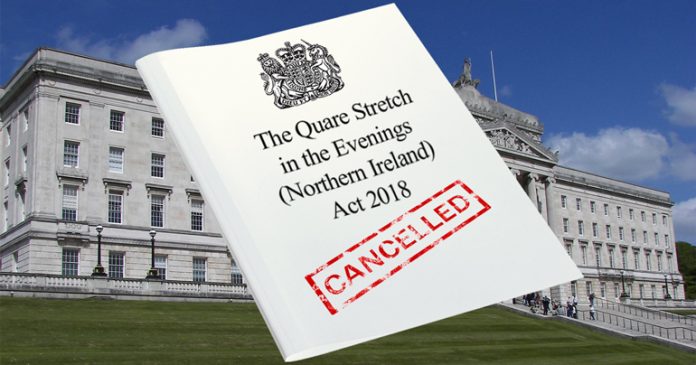 There is growing concern that the annual quare stretch in the evenings may be held up by the lack of agreement among Northern Ireland’s political parties.

After signs last week that a breakthrough may lead to an early announcement of the meteorological phenomenon, the subsequent collapse of the talks has left the situation in limbo.

A leaked document revealed by political commentator Eamonn Wallie apparently shows that Sinn Fein and the DUP had agreed to a twin track approach, with Irish and Ulster Scots Acts to ensure that any stretch in the evening would benefit both sides of the community.

Speaking after her meeting with Theresa May this afternoon, DUP leader Arlene Foster told reporters that she is hopeful that a Direct Rule minister would make a stretch related decision ”within weeks”, but however others are angry that this would not have input from local politicians.

“If the secretary of state announces ‘a quare stretch’ it won’t carry the same weight as one produced by a devolved assembly,” says the BBC’s political pundit Mark Davinportrush. “We’re more likely to see an austerity stretch in the evenings, perhaps limiting daylight to about half-seven at night.”

“Alternatively, we might see a massive hike in rates bills to cover any extra hours.”

Despite all this shite, The Ulster Fry has decided to go ahead and make its annual  proclamation, and so we can officially announce that as of 6.15pm today – Wednesday 21st February – there was indeed a quare stretch in the evenings.

Stick that up yer hole, Stormont.