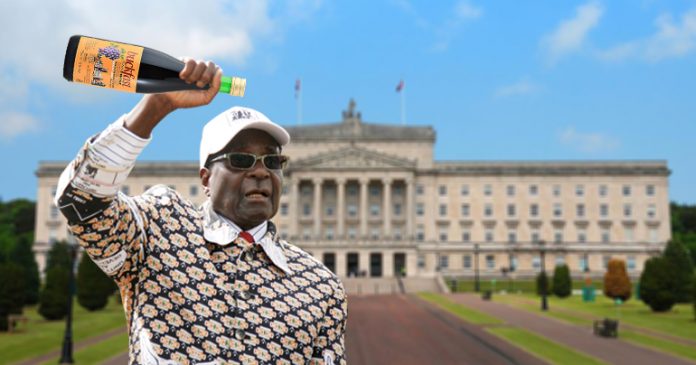 Plans are being drawn up to secretly fly African dictator Robert Mugabe to Northern Ireland, so that he can take up the reins of power in Stormont.

The Ulster Fry understands that, in the absence of a functioning executive, the British and Irish governments have agreed to hand power to the Zimbabwean President, on the grounds that “he can’t do any worse than the last shar.”

The governments hope that Mr Mugabe will be able to raise the Northern Irish economy to the same level as he achieved in Zimbabwe.

“He managed to get inflation to 231 million percent back in 2008,” says top economist Milton Steriliser, “which to be fair is a lot less than the increase in the price of Freddos that we’ve seen here over the last ten years.”

“At the same time he raised Zimbabwe’s literacy rate to 90% of the population, which is definitely an improvement on the figures we’re achieving in East Belfast.”

Mr Mugabe himself is said to be “looking forward to the challenge” , and is drawing up plans to expel all white people from the country.

“That’s one way to solve the Irish Question,” says Steriliser.

Despite this, local people have welcomed the move with several towns changing their names in honour of the new leader, including Mugabesbridge in Co Fermanagh, Mugaberamason outside Strabane and Mugaberry, near Lisburn