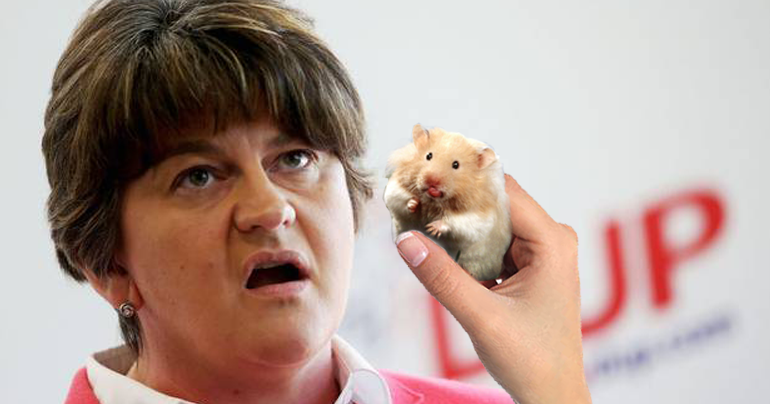 The DUP’s image in the UK was further tarnished today, after party leader Arlene Foster was accused of eating a family’s pet hamster amid ongoing talks with the Conservative Party.

“She landed to our house the other day slabbering that she was ‘top dog now’ and demanding that us ‘peasants’ make her tea and biscuits!” alleged 38 year old Peterborough dad, Peter Borough. “Poor wee Elmo didn’t take her on god bless him, but when Arlene noticed him running on his wheel, on a Sunday, she totally lost the plot! Snatched him right out of his cage and literally ate the bake off him!”

“She was rambling on about him being a ‘hateful sinner’. But her mouth was full to be fair…” he admitted “so she might have said ‘shinner'”

“How this DUP crowd claim to be truly British like us is beyond me though!” he sobbed. “Cos she didn’t even dunk him into her tea or anything!”

The unconfirmed news comes after several days of intense DUP criticism in which the party has been publicly lambasted for a litany of heinous acts including homophobia, islamophobia, arachnophobia, leaving the immersion heater on, double parking, not indicating at roundabouts, listening to Nickelback, enjoying televised snooker and downloading Songs Of Praise from an illegal torrent site, amongst others.

“We refute these ridiculous accusations” said DUP spokesman, Chip Monkstown. “But to save any further arguments, I’ve got a new hamster being delivered today, just for them.”

“The pet shop boys should coming in my back door any minute now” he added.