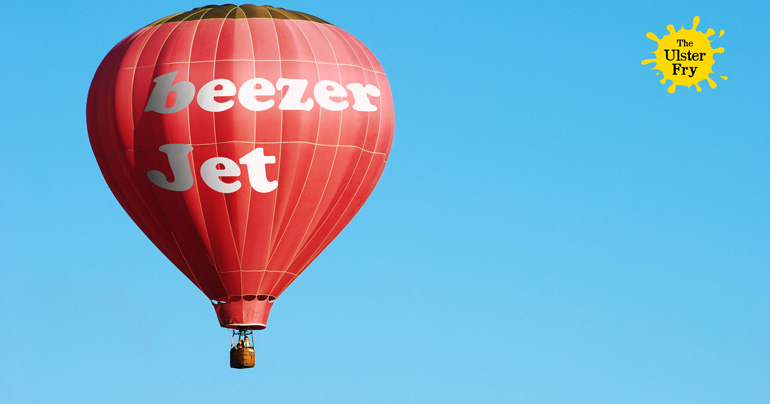 In the light of the news that United Airlines is to cancel its service from Belfast International to New York, local independent carrier Beezer Jet has been quick off the mark to step into the breach.

The airline, established earlier this year by businessman Hans Luggage, is one of Northern Ireland’s biggest success stories, now flying passengers to destinations as diverse as Enniskillen, Derry and Newtownards.

“Aye we’d been thinking of going further afield,” says Hans, “maybe to Rathlin or the Isle of Man, but this looks like our chance to hit the big time.”

Sadly Beezer Jet’s fleet of Gypsy Moth biplanes and WW2 Lancaster bombers doesn’t quite have the legs to reach the US, but Mr. Luggage is a resourceful man.

“The range issue was always going to be a problem,” he told us, “but I put my head together and suddenly it came to me – hot air balloons, and I don’t mean the ones up at Stormont. I know they’ll use fuel too, but I’m hoping that if the wind’s right they’ll get blown over without having to step on the gas.”

With space for only 12 passengers the tickets are sure to be the hottest thing in town, and Hans promises a premium service.

“No expense will be spared,” he revealed, “All of our seats are fully reclining, in that we have no seats but you can lie on the floor. The cabin crew will even serve in-flight meals – just Spicy Bikers and Buckfast for Economy passengers, but there’ll be cold Sausage Rolls and Harp in First Class.”

Beezer Jet’s new flights get underway in January, wind permitting, while United Airlines will be taking over the flexi-bus service in Portadown, subject to a £9 million grant from Stormont.