Trump to visit Ards Shopping Centre instead of London Embassy 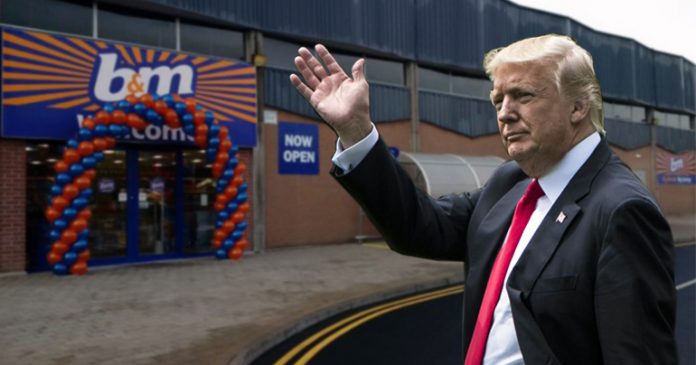 Donald Trump has sensationally scrapped plans to fly to London for the opening of the US Embassy, preferring to take a much needed break on the Ards Peninsula.

Speaking exclusively to The Ulster Fry, the controversial President revealed that he’d been planning the visit for months, and that there was “no way some new embassy was going to interfere with me getting round Woolco.”

“I’ll probably park Air Force One at your Newtownards Airport then get a taxi over to the mall,” he told our US correspondent, Randy Wankelfecker III.

“There’s some great stores there now, they’ve got a Poundland and a B&M Bargains, so I’ll be able to pick up a souvenir or two for Ivanka and whatever my son is called.”

Mr Trump also plans to take in a few of the Peninsula’s more glamorous sights during his trip.

“I’m hoping to catch the bus to Comber,” he revealed. “I’ve heard from some very reliable friends, good friends, that they do great potatoes there, and it’s only two letters away from the word combover.”

“Then maybe I’ll head down to the great port of Ballywalter for a poke, I can absolutely guarantee you that I’ll have the biggest poke in the whole peninsula. With sprinkles.”

However the president’s visit isn’t just for pleasure as he also plans to conduct some high level business.

“I’ve plans to invest in one of your biggest golf courses,” he told us. “By the time I’ve finished, Donaghadee Putting Green will be hosting the British Open.”

“I was referring to Craigavon,” he explained.